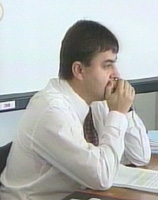 Richard Young (to the left), the managing director of a Cape Town-based defence information technology company, will continue his testimony today at the hearings into the government's multibillion rand arms deal.

In his testimony in Pretoria yesterday Young, the first witness outside government to testify in the public hearings into the arms deal, accused prominent figures of misrepresenting the facts to procure the strategic defence package.

Those implicated by his testimony include Chippy Shaik, the Head of Acquisition in the Defence Department, Frits Nortje, the former Corvette programme manager, and Johnny Kamerman, the Corvette project officer, who has since been promoted to Rear-Admiral.

Young also disputed earlier testimony heard by the presiding panel in several respects. It was, for example, difficult to believe evidence by cabinet ministers that the government had nothing to do with the awarding of subcontracts, Young said.

He contends there were irregularities in the awarding of a R40 million tender for information management systems used in the four Corvette ships South Africa bought under the arms package. Young's testimony, in part of a highly technical nature, comprised a typed document of more than 70 pages. He was about halfway through when the hearings were adjourned until today.

With acknowledgements to the Sapa and SABC.