Gritty, meticulous Young insists he has uncovered an arms scam.

There's a notion advanced by defenders of the arms deal that Richard Young is only fighting them for the money, that he's driven by sour grapes for having lost a lucrative subcontract for the German-built corvettes' C²I² Systems, was improperly edged out of the corvette package. He has been steaming about it since mid -1998 when French-owned Thomson-CSF (now called Thales), whose subsidiaries had just become the preferred suppliers of the combat suite contract, started, as he says, "arm-wrestling the department of defence to effectively work our system out of the combat suite". 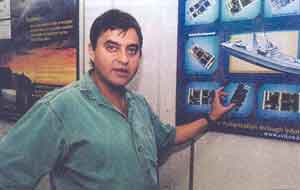 Young admits it was infuriating to be sidelined after investing R10m and much of his professional life in developing a system, in conjunction with the SA navy and Armscor, specially for the corvettes. A further R24m of navy funding went into the project, he says.

But to suggest he is motivated by self-interest or greed blithely ignores the fact that he has uncovered prima facie evidence of irregularities and questionable decisions in the arms deal that may have cost taxpayers millions, if not billions in rand.

He describes it as an "enrichment exercise for the black elite", and declares without a hint of pretension: "I'm exposing it in the public interest."

The final report, delivered to parliament only after it had been examined by President Thabo Mbeki and key cabinet ministers absolved government of wrongdoing and blamed the few irregularities it did find on the handful of officials and shaky procurement practices.

To what extent the editing amount s to a cover-up remains to e seen. The auditor-general is required to hand over thousands more draft pages. If he doesn't, Young says he may bring charges against him for perjury, defeating the ends of justice, contempt of court and contravening th Promotion of Access to Information Act. Mbeki took Young to task, without naming him, in his weekly letter last Friday, describing him as "an aggrieved potential and unsuccessful subcontractor". Using biblical allusion, Mbeki described Young and other critics of the arms as "fishers of corrupt men" who seek to entrench a centuries-old racist stereotype of "Africans as people that are corrupt, given to telling lies, prone to theft and self-enrichment by immoral means".

But Young firmly believes he has found a cover-up. He reacted angrily to an Fm article last week that argued the revelations were still not strong enough to be a ‘smoking gun'.

"I've caught out a bunch of liars", he insists. "I've spent a couple of hundred thousand rand proving th auditor-general lied to parliament, that fundamental things were taken out of the report." 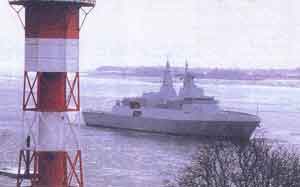 He says he's spent about R1,5m on legal expenses so far. He is suing government, procurement agency Armscor and Thales-owned African Defence Systems (ADS) for R150m in damages. He also has four defamation suits against corvette profect officer Rear Admiral Johnny Kamerman, ADS CEO Pierre Moynot, former Public Protector Selby Baqwa and lawyer Yunis Shaik, brother of ADS and Thomson director Schabir Shaik. A third Shaik brother, Chippy, had to resign as defence acquisitions chief for involvement in the contracting of companies tied to Schabir. Subsequent reports have alleged deputy president Jacob Zuma, who employs Schabir Shaik as a financial advisor, tried in March 2000 to solicit a R500 000 bribe from the former head of Thomson's African division, Alain Thetard, for whom a warrant of arrest has been issued by the Scorpions. Zuma has strongly denied the allegation.

Young accuses ADS of squeezing C²I² out of the running for the key information management system, "the co-ordinating nerve network" of the corvettes, by loading the C²I² bid price with about 120% risk, making it too expensive. He points out that the navy had preferred his system to that of Thomson, and maintains that the risk rating was a fabrication.

"For three years before we had to quote, Kamerman and his colleagues did an annual risk and cost audit of our work and no risks were ever identified," he says. "Only when the French got involved did that suddenly become a factor. It was a ruse to give ADS the contract."

He rejects the argument that the government was entitled to spread the arms contracts among countries to favour SA's strategic interests.

‘If strategic interests were the determinant then why bother to go through the tender process, the RFO's (requests for offer) at all?" he asks. "In that case just dish out the contracts but don't lead us on for years. We spent nearly R1m just preparing our proposals in 1998 /1999." 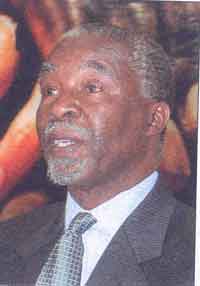 Last week Mbeki dismissed the claim that government would have had a hand in granting the corvettes combat suite to Thomson, saying government had contracts only with primary contractors - in the corvettes' case, the German-led European South African Corvette Consortium, which in turn had subcontracted to Thomson independently.

But Young says he has original drafts of the Public Protector's report that refute Mbeki's claim; that show Thomson's French bank signed a financial agreement directly with government for the combat suite. Perhaps most telling about Young's crusade is that for all of the accusations and revelations he has made in recent years he has attracted no counter-suits from those he has fingered. "That's because I have uncontestable evidence," he says.

He has built up an "arms deal virtual press office" on his company website with an archive of about 2 200 reports and articles going back to January 1998. Young probably knows more than anyone else about the deal. The accuracy of his own compilations may be due to his scientific training: he's an electronics engineer with a 1996 doctorate from Wits University, who worked briefly on government's space programme at Houwteq, near Cape Town, in the early 1990's.

But Armscor senior manager Pierre Meiring believes Young became a scientist because he was meticulous, not the other way around.

"He's extremely correct and precise, a perfectionist to the extent that he can be irritating," says Meiring, who has known Young since his varsity days and worked with him closely as a client on the corvette information management system through most of the 1990's.

The son of a KwaZulu Natal sugarcane farmer, Young went to Michael-house and matriculated from St Charles College in Maritzburg.

Because of Young's civil case against Armscor, Meiring would not discuss the arms issue. But he did say he was "convinced Richard is doing this all as a matter of principle - the money won't matter to him".

Young says he's been paying his legal bills out of his company earnings, though it is currently operating on a large overdraft because payment for corvette work has been delayed over contractual hitches. C²I² has small subcontracts for the corvettes' navigation management systems.

Nevertheless, offshore business has picked up. Young says the company has picked up foreign orders worth R15m since March this year and is supplying American, Swedish, German and Canadian companies.

C²I² electronics are being fitted to the latest US aircraft carriers and US Marine Corps assault ships, is some cases the identical equipment rejected by the arms deal contractors.

The company is located in Kenilworth, Cape Town, and employs 26 people, 15 of them graduate electronic engineers.

Young says he works about 60 hours a week, 30 - 40 hours on company business and the rest on arms deal issues. A keen spear-fisherman, he spends most of his weekends at his seaside retreat at Cape Agulhas. But here too he spends 10 - 15 hours working.

"It drives my girlfriend absolutely berserk,"he says. "She's totally bemused by the publicity and the controversy and can't understand why I must do it."

She'll have to learn - they recently became engaged.

With acknowledgement to Financial Mail.