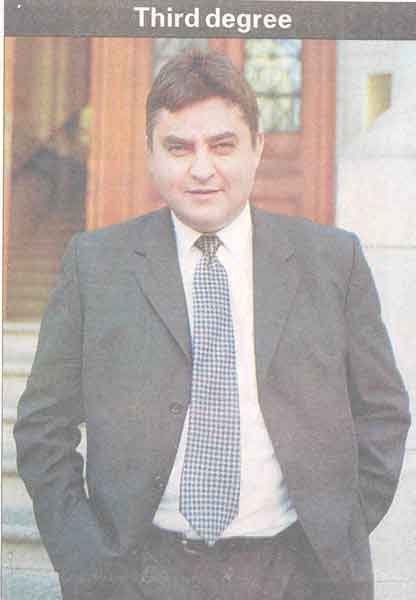 Shaik told the Cape Town High Court that he had made the remarks, on E-tv's Third Degree news magazine programme in November 2001, at a time when things were "difficult" for him and his family.

At the centre of the remarks was "Chippy" Shaik's conflict of interest role as chief of acquisition of armaments at the defence force, while another brother, Schabir, had acquired an interest in African Defence Systems through his company, Nkobi Holdings, which supplied equipment to the defence force.

The remarks had been made "at a time when Chippy's participation in the armaments acquisition process became a matter of some controversy", said Shaik.

He had wanted to put across the view that conflict of interest was neither material nor significant to the outcome of the procurement process and to counter the impression that his brothers had "colluded" to violate the adjudication process of the Strategic Armaments Procurement Plan.

He agreed he had defamed Young in remarks he made after hearing evidence given by Young and others during the public phase of the joint investigation into the arms deal.

Shaik said it was "a difficult cause I sought to represent at the time defending one's family integrity", and that he had made the remarks in a "robust" engagement between himself and presenter Debora Patta.

"There was so much written at the time about my brothers (about the arms deal)" .

Also, he himself had presented his credentials to become a Labour Court judge and his other brother, Rehaaz (Mo), was SA's ambassador in Algeria.

He agreed there was nothing in Young's testimony (to the joint investigation) which indicated that Young had fabricated evidence or had embarked on a sleaze and slander campaign.

In the TV programme, Shaik had said: "Richard Young has embarked on a campaign of sleaze and slander, using the press the gullible press, I may add.

"Our victimisation is that we are now subjected to mob justice and that you (Patta) and members of the Fifth Column, by means of sleaze and slander and a tissue of lies, have allowed and whipped up the public into a frenzy that now they bay for the blood of anybody."

Shaik's advocate, Rashid Vahed, appearing pro-amico, said to Young that the defence accepted it was "not right, proper and fair to label you in the fashion that you have been labelled.

"As businessmen you are entitled to your integrity, you're entitled to be regarded as an honest person but you ought to have accepted the apology (made by Shaikh in his plea)".

Young said he believed he never received an "appropriate apology or offer of settlement.

"This (the court proceedings) is the opposite of mob justice and this is the correct way of handling the matter."

With acknowledgements to Chris van Gass and the Business Day.