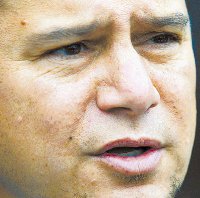 DEPUTY President Jacob Zuma received a major boost yesterday when — on the eve of a trial in which his financial adviser is accused of corruption — a survey found that more than a third of South Africans believe he is innocent.

The Markinor survey found that 34% of South Africans and 44% of ANC supporters believe Zuma is telling the truth when he insists he is innocent of the corruption listed in the charges against Schabir Shaik.

The Shaik trial, one of the most politically significant in post-apartheid South Africa, begins in the Durban High Court tomorrow.

The charges against Shaik are related to the awarding of contracts in the multimillion-rand arms deal.

This week one of the men who helped Shaik build his business empire will take the stand as the first witness against him.

The Sunday Times has established that Professor Themba Sono, the deputy president of the Independent Democrats, has been confirmed as the first witness to be called by the prosecution. He is expected to testify on Wednesday.

Sono, a former executive director of Shaik’s company Nkobi Holdings, resigned in January 1997 following a dispute with Shaik over R75000.

Nkobi Holdings and its partner, Thomson CSF France (now named Thint) were awarded subcontracts worth more than R1.2-billion in the arms deal.

Sono, one of the three politicians on the state’s witness list, is expected to testify before Judge Hillary Squires about board meetings at Nkobi Holdings.

Sono said yesterday: “I was told on Friday that I should be at court on Wednesday. Now that I am a state witness, I am not at liberty to discuss my relationship with Shaik or Nkobi Holdings.”

Shaik founded Nkobi Holdings in February 1996 and Sono joined him as an executive director two months later. Sono was an ANC supporter at the time. He later joined the DA and then the Independent Democrats.

Shaik is accused of paying Zuma more than R1.2-million over several years. The French company is also accused of offering Zuma a R500000-a-year bribe.

Zuma’s spokesman, Lakela Kaunda, said this week: “He reiterates that those who believe they have a case against him should charge him and prove it in a court of law, and stop running a mischievous smear campaign in the media.”

This week the Cabinet and the trade union movement Cosatu rallied behind Zuma. The Cabinet said in a statement: “It is hoped that the media will respect the dignity of the office of the Deputy President — and judicial institutions — and not impugn his integrity on the basis of allegations not proven in a court of law.”

Cosatu said: “It seems someone within the Scorpions is hell-bent on discrediting Jacob Zuma and attacking his integrity, despite the fact that he has not been charged and is not to be charged.”

However, DA leader Tony Leon yesterday said Zuma had ignored several opportunities to prove his innocence and should be in the dock with Shaik.

Leon said Zuma could have sued former National Director of Public Prosecutions Bulelani Ngcuka for saying he was under suspicion.

Yesterday Shaik’s lawyer, Reeves Parsee, would not disclose how his client would be spending the weekend. He said: “The press must allow Shaik to breathe.”

Shaik’s neighbours in Durban, speaking on condition of anonymity, said they had not seen him for a week. Nor has he been seen at his favourite restaurant.

Markinor said its face-to-face survey of 3500 adults had found Zuma’s popularity had risen by 17% in the six months since it dipped after Ngcuka declared there was prima facie evidence that he was corrupt.