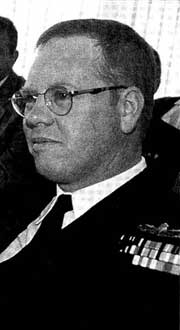 News of two interesting new appointments reached noseweek as we went to press. First off, retired Rear Admiral (Junior Grade) Jonathan Kamerman of the SA navy (photo) – and the department of defence’s point man for the corvette deal – has joined German ship-building conglomerate Thyssen-Krupp as vice president of their sales department, based in Hamburg.

Thyssen is one of the companies currently under investigation in Germany for allegedly paying bribes to secure its share of the deal.

We thought the public should know about these appointments, because you can bet your retirement home in Houghton and your Cayman Island bank accounts, that neither companies nor individuals concerned will be announcing their new jobs.

In many countries such appointments would be regarded as corruption, leading to criminal charges being brought against both them and their employers.

Jonathan Kamerman was in charge of the acquisition of the South African navy frigates, and signed the acceptance documents for the first two frigates as they arrived. Kamerman also gave some rather creative evidence at the hearings into the arms deal that were conducted by the Public Protector. Despite what the Department of Defence and the Navy may tell the public, the Frigates are not a great success. They have severe problems with their radar and the guns don’t work properly. There are also problems with at least one ship’s drive shafts.

noseweek’s source in Simonstown says the worst of the ships are frigates numbers one (Anatole) (sic - Amatole) and three (Spioenkop), where there are serious wiring and electrical problems. These frigates were built in Hamburg by Blohm and Voss – now part of the Thyssen-Krupp group. Although frigate number three has not yet been accepted, it will be impossible for the navy not to accept her, as Anatole, with similar problems and defects, has already been accepted by Kamerman.

Apparently the major problem is that all manner of electrical cables are laid out next to each other and their electro-magnetic fields interfere with each other, largely due to the vessel’s combat suite. Kamerman gave evidence to the Public Protector that the combat suite developed by Cape Town businessman Dr Richard Young was merely a “technology demonstrator” and that it was thus perfectly understandable for the navy to go with the alternative Thomson CSF (now Thint) combat suite. But Young’s suite used fibre-optic cables rather than copper wires, because fibre optics do not have electro magnetic fields…

Young sued Kamerman for defamation for alleging in his testimony that Young compromised national security by exposing offical documents. When the Rear Admiral failed to appear in court to defend himself, Young won. Kamerman then begged the court for a “recission” – another hearing where he could actually defend himself. Young tells noseweek the new hearing is still pending. As both he and Kamerman are on the witness list against Schabir Shaik, it was decided to wait until after Shaik’s appeal *1.

Kamerman, currently based in Hamburg, failed to respond to noseweek’s questions sent to his new email address.

Readers may remember that Kamerman received cash gifts from Schabir Shaik’s ADS before he signed the contract giving Shaik’s company the contract to supply electronic components and the combat suite. The draft reports into the Auditor General revealed this *2 – and also observed that Kamerman’s story to the Public Protector about Young’s products differed to the yarn he told investigators. In short Kamerman committed perjury. Asked what he thought about Kamerman’s new appointment, Young said he was “sickened.” At least the public may be spared the spectacle of Kamerman defending himself in court against Young’s defamation suit. Our money is on him staying in Germany where South African civil courts have no jurisdiction.

And then we have Lisa Manchu, who was, before joining the private sector, a Department of Transport boss. In 1997 Prodiba (a consortium of which Schabir Shaik’s Kobitech and French defence supplier Thomson CSF, now Thales, are members) won the contract to supply new drivers’ licences to the department of transport. Almost immediately a mysterious pattern of selfless generosity began to emerge: Shaik paid for the former Transport Minister Mac Maharaj and family to visit Disneyland. A criminal investigation was launched into this and other bribes given to Maharaj. Scorpions spokesman Makhosini Nkosi told noseweek it was not policy to comment on investigations.

The Department of Transport claimed that the supplied driver’s licence card met international design standards. Evidence during the Shaik trial showed this was not the case – for one thing the bar code on the licence was around a third too small to be read with the handheld card readers – special readers had to be custom built and bought at extra expense to the public. When the contract to print and supply the licences came up for renewal all bets should have been against Prodiba having its licence renewed. It was. The official who renewed the contract – without putting it out for tender or consulting with the Treasury – was, you guessed it, Lisa Manchu... Collen Msibi, spokesman for the department of transport says: “There was a disciplinary hearing. But I wasn’t around at that time. I have to check up to find out what happened.”

We nose what happened. Manchu resigned – before his disciplinary inquiry could be concluded – and joined Prodiba. Leaving a job in the public service to take up a post with a private company with which you have had official dealings is commonly known as “revolving door employment.” In many countries such dealings are illegal. The reason being that such deals allow officials to negotiate employment contracts with companies in return for giving them massive contracts. The cost of the employment is built into the contract – and is to all intents and purposes a bribe. n


*1Actually, as both Young and Kamerman are on the witness list against Zuma and the Two Thints, it was decided to wait until after that trial.


*2Actually, this is the main point - the references to cash gifts was removed from the final draft of the investigation report. Yet the AG lied to Parliament that there were absolutely no changes from the final draft report to the tabled report other than those relating to "user-friendliness".

Indeed, the issue of gifts to naval officers was otherwise not a major issue as far as them being gifts. This being said, the gifts should never have been cash gifts because ADS collected money contributions from the contractors involved in Project SUVECS in order to purchase a farewell gift for Kamerman who was relocating to Germany to manage Project Sitron. ADS then gave the cash to Kamerman who requested it as cash. This was irregular, but not a bribe.

More serious was that the cash gift, indeed any gift with a value of over R350 need to be reported to the recipient's superior and recorded in a gift register. Kamerman's superior officer was the Director of Naval Acquisition (DNA) , but it was claimed that he reported to DNA's superior, the Chief of Acquisitions, none other than Chippy Shaik. Reviewing the recorded evidence it is clear that Kamerman and Shaik got up to some very creative explanations about when and how the gift was reported, including a very obviously back-dated Gift Register which suddenly appeared out of the depths of the Department of Defence's filing system.

This is the rub, the lies, damned lies and deceit - not the gift itself.