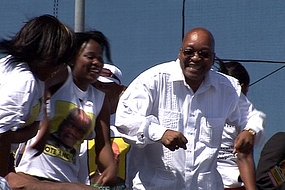 Jacob Zuma dances at a rally near Cape Town

He's in the fast lane to the top in South Africa but there’s powerful evidence the man following the trail blazed by Mandela has been on the take.

Reporter Andrew Fowler investigates whether Jacob Zuma - the man most likely to become the President of South Africa in less than three weeks – took bribes from a French arms company.

Jacob Zuma’s already fought and won a trial over rape charges. And now the bribery charges against Zuma have been dropped.

South Africans who once rejoiced when Nelson Mandela was released are deeply saddened by the prospect of President Zuma, telling Fowler:

“After 15 years of democracy, after 15 years of liberation, the party that led us to independence, how is it possible they can present someone who’s a criminal suspect as a President for the

FOWLER: The heart of Paris, October the 9th 2001, officers from the French Economic Police Unit set out to conduct a raid. Their target, the headquarters of France’s biggest arms manufacturer – Thales. Armed with a search warrant, they were acting on behalf of the South African police. Once inside Thales they confiscated masses of documents, including evidence that Thales had paid bribes to a Mr X, a prominent South African politician.

Mr X was none other than Jacob Zuma, leader of the African National Congress and most likely the next President of South Africa. Here on the outskirts of Cape Town, twenty thousand of South Africa’s poor have come to see and celebrate Zuma.

If there’s one thing that can be said about Jacob Zuma, he knows how to move. At sixty-six years of age, he can strut the political and populist stage like few others.

JACOB ZUMA: [Presidential candidate] ‘I have the love for the people. I dedicated my life to liberate them and myself. I dedicated myself to fight for freedom so that we are free.’

FOWLER: Jacob Zuma might have helped win the battle against apartheid, but for the past four years he’s been fighting for his own political survival. When Foreign Correspondent first profiled Jacob Zuma back in 2006, he was mired in a criminal trial accused of rape. His supporters claimed it was a conspiracy to destroy his political career.

MAN IN CROWD: ‘Cause we know all these things are happening as a conspiracy so that Zuma can never be the president.’

FOWLER: Conspiracy or not, the courts acquitted Zuma of rape and cleared his name. Jacob Zuma’s jubilation didn’t last long. No sooner had he been cleared of rape, he was charged with accepting hundreds of thousands of dollars in bribes from the French defence giant Thales.

To understand the strength of the evidence against Zuma, drive south from Cape Town to the postcard setting of Simons Town, one of the country’s main naval ports. Rear-Admiral Robert Higgs is the head for Indian ocean operations. His fleet is small but very modern. Central to his fleet’s fighting capacity is part of the combat system provided by Thales.

‘How has the French system integrated into what you need? How is it working?’

REAR-ADMIRAL ROBERT HIGGS: [South African Navy] ‘I think it’s working very well. I think it is working very well. We went through… we have gone through a lot of operational test and evaluation. We’ve used it when we’ve exercised with other navies and we used it when we were exercising with NATO. We’ve used it continuously in everything we have been doing. It is the heart of the ship.’

FOWLER: That the French got the $400 million contract, stunned many in the defence industry. They were never the first choice but Jacob Zuma saw to it that the business went their way.

DR RICHARD YOUNG: [Defence contractor] ‘Andrew this is our documentation centre. In this room there’s about a million scanned pages all backed up on DVD etcetera.’

‘How much did he personally benefit from the Thales bribe?’

DR RICHARD YOUNG: ‘Well the bribe was recorded as five hundred thousand rand per year until African Defence Systems starts paying dividends that was calculated to be a million rand.’

DR RICHARD YOUNG: ‘So this French company actually has control over the architecture and the future upgrade and maintenance of the South African navy’s combat system.’

FOWLER: ‘So the bribe was worth paying?’

DR RICHARD YOUNG: ‘Indeed it was. It was cheap at the price.’

FOWLER: The reason why Richard Young lost out to the French can be found more than a thousand kilometres away in Kwa Zulu Natal. This is Zuma country. The kids have every reason to be happy, Jacob Zuma built them a brand new school. Jacob Zuma also built this – a palatial Zulu compound to house his four wives and eighteen children. We called in to see if the President-most-likely was home. We were out of luck. The boss was out on the campaign trail.

What’s not so amusing is where the money came from to pay for the rural retreat. Court documents show it came from Thales.

ANDREW FEINSTEIN: [Former South African MP] ‘And he owed the builder as I understand it at least a million rand at that time.’

ANDREW FEINSTEIN: ‘I think at that particular time that this investigation was unfolding, he had a dire need because this builder was threatening to go public with the fact that Jacob Zuma was unable to pay him the million rand that he owed him. But in addition to that, he had the need to keep this very large family in a manner to which the family of the Deputy President of the country and the ruling party should be kept.’

FOWLER: When the scandal broke, it cost Jacob Zuma the Deputy Presidency of the country. Since then, it’s been an ongoing battle of Zuma versus the State.

FOWLER: The case against Zuma is that he didn’t act alone. His long time financial advisor Schabir Shaik was the middleman. Shaik has been very generous to Zuma over the years.

DR RICHARD YOUNG: ‘At the end of the day they’re talking about Schabir Shaik providing more than 4 million rand, we’re talking about kind of a million Australian dollars worth of benefits to Jacob Zuma.’

FOWLER: It’s how the two men have been treated so differently that caused the ongoing furore in South Africa. Schabir Shaik got a mammoth 15 year sentence for bribing Jacob Zuma. Zuma charged with corruption, racketeering, money laundering and fraud in 2007 has managed to fend off the courts ever since.

PATRICIA DE LILLE: ‘The arms deal is really the basis for all the decay and all the corruption that we see today in our country, that’s really where it all started.’

FOWLER: Patricia de Lille is one of the few politicians in South Africa prepared to stand up to the Zuma machine. Her independent Democrat Party is growing by the day, target number one – Jacob Zuma.

DJ AT RALLY: [Addressing supporters] ‘The story goes on, the story won’t stop. Zuma, you can run, but we can see you.’

FOWLER: For six years Patricia de Lille has battled away at Zuma, demanding he be brought before the courts.

PATRICIA DE LILLE: [Independent Democrats Party] ‘Right now, the way leaders are behaving is as if they are above the law… that if you are a political leader you must be treated different from the common criminal. It’s sending out the wrong message.’

FOWLER: Four weeks ago the first signs that both political leaders and common criminals may not be held accountable appeared. They centred on Schabir Shaik the man gaoled for 15 years for bribing Jacob Zuma. Schabir Shaik isn’t in a gaol. He’s been holed up in this hospital for months, reportedly suffering from stress related problems and reportedly under tight security.

SECURITY: ‘You need to find out about a patient?’

We got past the first security in a matter of seconds. Surely when we asked for Schabir Shaik the alarm bells would ring.

RECEPTIONIST: ‘He’s in B2 West… the B block is this one right here.’

‘Could you ask him if he would speak to us?’

NURSE: ‘He said he’s not expecting you.’

Just why the security was so lax became apparent two days after our visit. Schabir Shaik, friend of Jacob Zuma, was effectively paroled on medical grounds and sent home. Many wondered if Zuma was about to get off the hook too.

Just 24 hours ago Zuma’s supporters were once again in the streets, the corruption charges had been dropped. The National Prosecuting Authority announced there had been an ‘abuse of process’ in the handling of the case, which could be seen as political interference.

MOKOTEDI MPSHE: ‘In the light of the above, I have come to the difficult conclusion it is neither possible nor desirable for the NPA to continue with the prosecution of Mr Zuma.’

FOWLER: At no time in his 45 minute announcement did the Acting Head of the NPA suggest the evidence against Jacob Zuma was flawed.

In two weeks time, South Africans will go to the polls and Jacob Zuma will almost certainly be elected the country’s next President. For many, the fact that Jacob Zuma never stood trial to have his guilt or innocence proven will cast a shadow over the country.

ANDREW FEINSTEIN: ‘The rule of law, the basic foundation of our democracy, of the equality of all before the law will have been destroyed. And in a country that suffers from one of the highest rates of violent crime in the world, South Africa can ill afford for its most senior leader to be post the April 22nd election, to be the one most flagrantly undermining that rule of law.’

- The Smoking Gun fax. This is a translation from French of the encrypted fax sent from south Africa to Thales (Thompson CSF) Headquarters in Paris.

- Judgement handed down in 2005, sentencing Schabir Shaik to 15 years jail.

- The 2008 Appeal against the Schabir Shaik judgement.