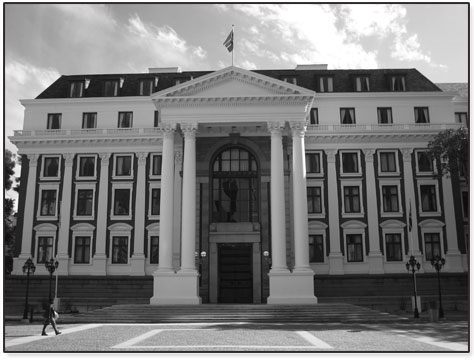 Parliament’s Standing Committee on Public Accounts (Scopa) has postponed hearings on allegations of impropriety and irregularity regarding the R47.4 billion Strategic Defence Package (SDP) until after the 22 April general election.

Many of the allegations are now a decade old and have been previously investigated. Scopa in November decided to revisit the SDP after persistent media reports that there was new evidence and that these investigations had been interfered with.

Business Day newspaper adds National Prosecuting Authority acting director Mokotedi Mpshe told Scopa yesterday the dissolution of its Directorate of Special Operations – its FBI-style investigative wing known as the Scorpions has undermined criminal investigations into some of the allegations surrounding the SDP.

Mpshe had been called to explain why there had been so little progress with the investigations eight years after a report of the joint investigating team in 2001 urged that these be undertaken “speedily”.

The prosecutions boss agreed that the investigations had taken too long, saying this was because of their complexity, the fact that foreign jurisdictions were involved and because of the extent of litigation involved. Also, the NPA had been plagued by the departure of skilled investigators.

Willie Hofmeyr, head of the NPA’s Asset Forfeiture Unit added that the dissolution of the Scorpions had caused a great deal of uncertainty and led to the resignation of 67 people since January last year, an average of about five a month. These people were not replaced.

Hofmeyr said the process of incorporating the Scorpions into a dedicated directorate within the South African Police Service was going well and he hoped it would not have any negative implications for the investigations.

“I don’t think the relocation of the directorate of special operation as such will have a significant effect on the cases,” Hofmeyr said. “We don’t have a great fear of relocation, but fear the uncertainty and loss of investigators.”

But the SA Press Association quoted him as saying the departures could seriously hamper ongoing arms deal-related investigations. "We are losing people we cannot replace and that could really impact on one of these serious cases," the wire service quoted Hofmeyr as saying.


Male fides at the Justice department?

Mpshe acknowledged that the NPA has had difficulty in obtaining and responding to a request from Germany for help in probing alleged misconduct by ThyssenKrupp, the Dusseldorf-based company that supplied South Africa with four frigates, because the document was still in the hands of the justice ministry.

He said the NPA first asked the ministry to pass on the letter from German prosecutors in 2007, and deliberately asked again after Enver Surty replaced Brigitte Mabandla as justice minister late last year. "The information we got was that a request came from Germany via the department of justice and that it was sent back to Germany for some clarification.

"We don't know whether it has come back to the DG (director general of justice). So we still have not received (it) to date." He said the NPA's knowledge of the German request for assistance was based on what it had read in the newspapers. It has been reported that the prosecuting authorities in Dusseldorf have since abandoned their probe because of lack of co-operation from their South African counterparts.

Trent says he is very concerned that “not more than three experienced investigators” are currently dealing with SDP-related matters. “This, it was made clear, resulted in constraints that seriously affected investigating capacity,” he said in a statement received by defenceWeb.

The hearings was still of value, however. “As a consequence of [yesterday’s hearing], we have a much clearer picture of the problems facing the … Scorpions and the … NPA.”

“Perhaps the most serious problem facing the NPA, however, emanates from the Department of Justice’s continued unwillingness to facilitate cooperation with the recent German investigation into alleged irregularities and bribery in the purchase of the four … [frigates].” This, said Trent, who is retiring and will not be back in Parliament after April, is “an unacceptable state of affairs that the DA would condemn in the strongest possible terms”.

In a written submission to Scopa the author of The Arms Deal in Your Pocket said there were suggestions that offset deals, a key argument advanced by government for the SDP had become "an avenue" for corruption.

Holden said an investigation into a fraud at South African Royal Manufacturers, a company involved in a gold “offsets” project, may have found evidence that members of cabinet and government received kickbacks. He added that investigations to date have only uncovered the proverbial tip of the iceberg. "There exist many avenues of investigation into the [SDP] that have not been fully explored," the author averred.

"Unless this is done, it is verily believed that innumerable acts of corruption, and the substantial mismanagement of the public purse will continue to be ignored."

C2I2 CEO Richard Young says he made an 80 megabyte electronic submission to the committee, consisting mostly of documents related to drafts of the ill-starred Joint Investigation Team’s (JIT) final report.

The JIT comprised the Scorpions, Public Protector and Auditor General and its 14 November 2001 final report was intended by government to be the last word on the allegations.
In a letter to Scopa he disputes the contention made by one MP last week that none “of the stuff Mr Young is talking about is new." Young says there is indeed much that is new – even to Scopa.

“… by 2003 I only had been furnished with the chapters of the AG's draft investigation report relating to my specific complaint regarding to corvette combat suite (i.e. Chapter 12 which became Chapter 11 in the final report). I was only furnished [this] as a result of a further court order with the balance of the draft investigation reports on 1 December 2004, i.e. nearly a year and a half [after Scopa August 2003 when revisited the SDP with the AG.

“Indeed the relevant judgment out of the Pretoria High Court was only handed down by [Judge] de Vos on 11 November 2004. This part of court order was upheld by the Supreme Court of Appeal in its judgment of 31 March 2006. So indeed, even the draft reports are new to SCOPA.

“These draft reports refer to formal findings of irregularities in segments of the SDPs other than the [frigate] combat suite, including the Lead-In Fighter Trainer (LIFT) segment, Advanced Light Fight Aircraft (ALFA), Light Utility Helicopter (LUH) and submarine segments, such findings having not been included in the JIT's final report of 14 November 2001.

Young next points out that there are substantive differences between the Joint Investigation Report into the Strategic Defence Packages tabled in Parliament; and drafts thereof, provided to President Thabo Mbeki and a number of ministers, allegedly for comment.

The first, and most obvious, change is the report was shortened from about 900 pages to 384. “Just one important feature of the full report that disappeared was the cross-referencing to evidence source documents. This substantially impairs a report's value as a forensic investigation report, indeed almost any formal report at all. He adds that “only about 25% of the content of the AG's full report was disclosed” in the final JIT report tabled in Parliament.

“As things transpired the final report was only tabled on 14 November 2001, this clearly being due to the very substantial effort to effectively almost completely dissemble and reconstitute the report,” Young avers.

“There are numerous and substantive differences between the draft Joint Investigation Report into the Strategic Defence Packages and the Strategic Defence Packages Joint Report that was supplied to the President and the Ministers Committee, this despite categorical statements made on a number of occasion within and outside Parliament by the then Auditor-General Shauket Fakie CA(SA) and the then Public Protector Selby Baqwa SC that the only changes were formatting by nature and made in order to improve readability .

“I would venture that the differences between the draft and final reports are numerous, substantive and include exceptionally serious omissions and additions,” Young charges.


With acknowledgements to Leon Engelbrecht and defenceWeb.