The new order is worth over GBP 500 M

(Delhi, India, July 28, 2010) -- In a move underlining the importance of BAE Systems' presence in India, the company has secured a new order, worth over pound500 million, with Hindustan Aeronautics Limited (HAL), to supply products and services to enable a further 57 Hawk Advanced Jet Trainer (AJT) aircraft to be built under licence in India for the Indian Air Force (40 aircraft) and Indian Navy (17 aircraft). 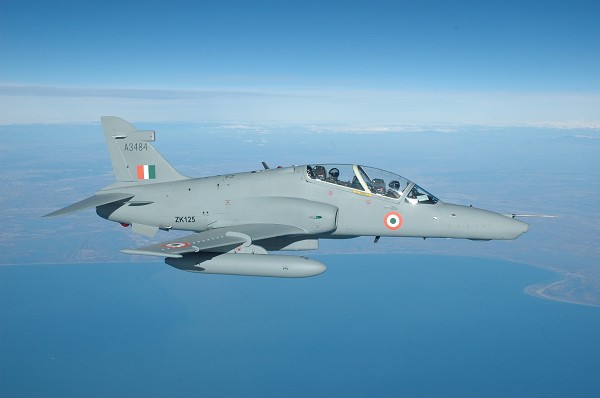 The final terms and conditions for the contract were signed by Guy Griffiths Group Managing Director International, BAE Systems, in the presence of British Prime Minister, David Cameron on his historic visit to India and BAE Systems' Chairman Dick Olver.

The aircraft will be manufactured under licence at HAL's facilities in Bangalore and BAE Systems will provide specialist engineering services, the raw materials and equipment necessary for airframe production and the support package for the Indian Air Force and Indian Navy end users.

"This new order continues and strengthens the long standing relationship between BAE Systems and HAL. It highlights the importance of BAE Systems' strategic development of India as a home market, and the benefit of solid Government support."

This year BAE Systems and Mahindra & Mahindra launched Defence Land Systems India a joint venture whose first product is a mine protected vehicle designed and developed specifically for India. BAE Systems is committed to developing a domestic business in India and will continue working with industry in India to develop further capabilities in the defence and security sectors."

With 18 customers, the Hawk aircraft has been widely exported around the world. Customers include Australia, Canada, South Africa, Bahrain, India and the UK Royal Air Force.

Prior to today's announcement BAE Systems was already working with HAL and Rolls-Royce to supply 66 Hawk aircraft to the Indian Air Force and this additional order will extend the current partnership for a further six years.

BAE Systems is committed to the development of a long term sustainable domestic business in India, not just in manufacturing, but in design, development, systems integration, testing and support. The company firmly supports the Government of India's objective of procuring 70 percent of defence equipment domestically. The further development of its long relationship with HAL, and the establishment of Defence Land Systems India are real examples of the company's determination to take active steps to demonstrate its support for the Government of India and India's defence services.

Just when BAE Systems should have been internationally disbarred from doing business due to its permanent and systematic corruption, it pops up with a GBP 500 million order.

And look who's there at the contract signing in India.

This time the Tories, last time it was that other wanker.

BAE feels squat, it bribes them all the same, the only thing is that a new incoming government might get a bit more because it is usually more pliable and amenable.

In the meantime the South African Hawks investigation into BAE Systems and its Hawks deal is going nowhere fast, just things for the last ten years.

One difference, Thabo Mbeki got January Masilela (third day in office) and Chippy Shaik to sign the SAAF Hawks and Gripen contract.

With acknowledgements to ASD News.