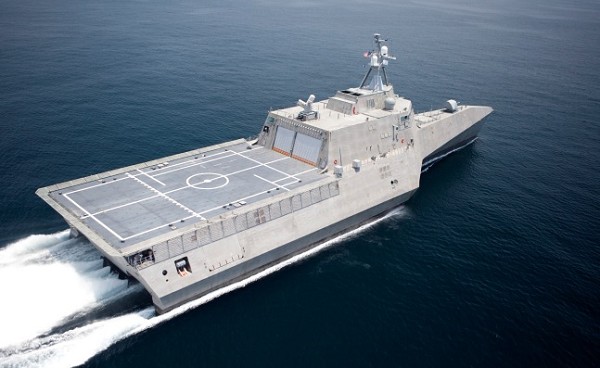 (July 13, 2010) -- Austal has submitted its best and final offer to the US Navy today for a 10-vessel Littoral Combat Ship (LCS) contract.

If Austal is awarded the contract, 2,000 more jobs will be created at the company's Mobile, Alabama shipyard, adding to Austal's current US workforce of 1,500.

The LCS program began in 2002 with the US Navy's pursuit of a new class of up to 55 ships for multi-mission support. The LCS is envisioned to be a versatile, networked, agile, surface combatant capable of defeating anti-access and asymmetric threats in the littorals.

In October 2005, Austal, as a part of the General Dynamics LCS team, was one of two bidders awarded a landmark construction contract for one of two LCS Flight 0 ships, USS Independence (LCS 2), followed by a contract to build a second Independence-class LCS Flight 0 ship, Coronado (LCS 4), in May 2009. Austal is now the prime contractor bidding for the 10-ship program plus five additional sets of Selected Ship System Equipment for the second source shipbuilder.

Austal has worked closely with their suppliers, their teammate General Dynamics Advanced Information Systems, the State of Alabama, and local city and county authorities to develop a very competitive offering. The Austal LCS Team delivers proven design and construction expertise of commercially derived high-speed combat vessels in the United States and the integration of military computing environments for weapons, sensors, and communications.

Regarding the proposal submitted by the Austal LCS team, Austal USA President and COO, Joe Rella commented, "Austal USA has come a long way from first arriving in Mobile, the silicon valley of shipbuilding, ten years ago. By leveraging the shipbuilding experience gained in Australia, the lessons learned from the LCS and Joint High Speed Vessel programs, our investment in facilities, combined with the best shipbuilders in the world, we have created the critical mass necessary to provide the lowest risk and best valued solution as prime contractor for this program. Without a doubt, we offer the most innovative, efficient, and capable vessel to the Navy."

Austal would like to thank Mayor Sam Jones, the Mobile City Council, and the Mobile County Commissioners for their efforts in providing commitments for infrastructure development. Governor Riley and the Alabama State Development Office and the Alabama Industrial Development Training organisations played a major role in providing both infrastructure and extraordinary assistance going forward. US federal lawmakers Senators Sessions and Shelby and Congressman Jo Bonner have provided their support in both the authorisation and appropriation processes for the vital LCS program, and their assistance to convince the US Navy to make capability a criteria in the competition.


With acknowledgements to ASD News.