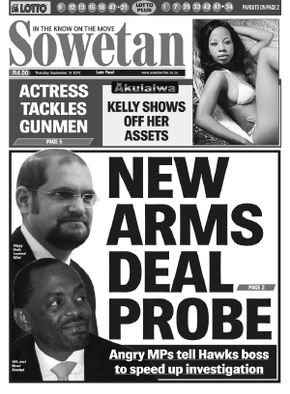 GERMAN authorities and the Hawks are in possession of a signed agreement in which a German arms dealer agreed to pay a bribe to a group represented by Chippy Shaik.

Yesterday, head of the Hawks, Anwa Dramat, told Parliament's standing committee on public accounts that there were still two active investigations into R450million worth of alleged bribes by arms manufacturers who benefited from the deal.

The R50billion arms deal was signed in 1998. By 2002, an investigation was launched into allegations that hundreds of millions of rands worth of bribes were paid by international weapons companies to politically connected South Africans to secure the deal.

Fingers were pointed at key ANC leaders including former president Thabo Mbeki, the late former defence minister Joe Modise, his then successor and now Cope leader Mosiuoa Lekota with regard to the deal.

But the investigation never reached any conclusion, and seemed, until yesterday, to have been put on the back burner.

Dramat said an estimated R300million could have been paid in bribes related to a deal with British Aerospace Systems, and R140million in bribes related to the deal with the German Frigate Consortium. BAE supplied 50 Hawk and Gripen fighter jets to South Africa. The German Frigate Consortium supplied the SA navy with four warships.

It has been alleged that Chippy Shaik, the brother of secret service head Mo Shaik and convicted fraudster Schabir Shaik, received a bribe of R21million in exchange for an alleged promise that warship company Thyssen would win a contract to provide the South African navy with four warships.

Dramat also revealed that when the Scorpions were disbanded last year, their investigation into the German Frigate Consortium's leg of the arms deal was not transferred to the Hawks.

Young is a arms dealer who lost out in the arms deal and then became a corruption buster.

Dramat said the docket had been handed over to the NPA in June to decide whether to prosecute.

"The question is whether it is in the best interests of the country to pursue these investigations, which will take at least five to 10 years and cost more than R10million. That is for Parliament to decide."

He was forced to retract this statement after angry MPs told him it was up to the police to collect evidence and then for the prosecuting authorities to decide if there was a case.

National Director of Public Prosecution Menzi Simelane said the NPA had received the docket from the Hawks and had handed it over to the serious and commercial crimes unit.