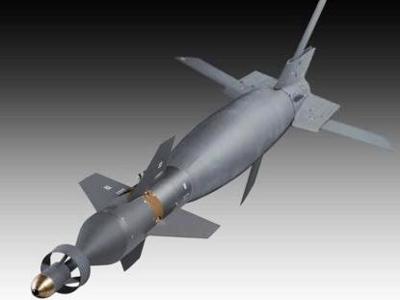 South Africa has inked a deal with US defence giant Raytheon Company for an undisclosed number of Paveway II laser-guided bomb (LGB) kits for its fleet of Saab Gripen advanced light fighter aircraft. Raytheon, who made the announcement at the Farnborough airshow, disclose a value for the deal, which is also not yet visible on the Armscor tender bulletin system.

The US company says the deal is the first significant American sale to SA in 25 years. “Raytheon will provide the South African military with LGB computer control groups and air foil groups that transform "dumb" bombs into precision-guided munitions for operational test and evaluation on South Africa's Gripen fighter aircraft,” the company says in a statement.

“Armscor awarded a contract on behalf of the South African Air Force (SAAF) for the procurement of LGB bomb kits. Armscor … is the officially appointed acquisition organisation for the South African DoD (Department of Defence), the statement adds. The direct commercial sale was negotiated with the assistance of South Africa's Atlantis Corporation and calls for Raytheon to begin delivery next year. In addition to the weapons, Raytheon will provide air- and ground-crew training.

Harry Schulte, vice president of Raytheon's Air Warfare Systems product line says the “combat-proven Paveway family of weapons is integrated on more than 22 aircraft and serves 41 nations around the globe, making this weapon the ideal choice for the South African warfighter. Raytheon is the sole provider of the Paveway family of weapons and is committed to providing the warfighter with a reliable direct-attack weapon at a cost-effective price."

It is understood the SAAF chose the Paveway over the similar Denel Dynamics Umbani LGB kit because the former is already integrated onto the Gripen, meaning the acquisition does not incur the SAAF any development and testing costs. The order is therefore in line with the SAAFs stated intention of ordering weapons that have already been cleared for use on the Gripen.

Armscor issued a request for quotation for Paveway last year. The Paveway LGB kit turns a standard Mk 82 500-pound (227kg) general-purpose bomb into a GBU-12 laser-guided air-to-ground "smart" bomb and the Mk 83 1000lb (454kg) bomb into a GBU-16. A high degree of accuracy is achieved when an operator (either airborne or ground-based) illuminates a target with a laser designator. The bomb is then guided to a spot of laser energy reflected from the target. The SAAF has already ordered the Rafael/Zeiss Litening III laser designation pod (LDP) for use on the Gripen C single-seat and D dual-seat fighters.

The weapon will provide the Gripen fleet with a full night-attack/all-weather precision guided munition (PGM) capability. According to Raytheon's fact sheet for the Paveway II, 99 deliveries of guided munitions will yield a circular error probable (CEP) of only 3.6 feet, versus a CEP of 310 feet for the same number of unguided bombs dropped under similar conditions.

With acknowledgement to Leon Engelbrecht and defenceWeb.

So much for support of local industry.

Nothing was taken into account in this regard when it came to the acquisition of the Gripen for the SAAF.

Modise forced the acquisition of the JAS 39 Gripen because it was the only light fighter aircraft British Aerospace could offer.

BAe initially wanted to sell the EADS Eurofighter to the SAAF (BAe has a major shareholding EADS), but this was far too expensive for the SAAF.

Much fancy footwork was then done.

Then Modise and the DoD did a lot of fancy work to get the only choice down to the JAS 39 Gripen ALFA linked to BAe's Hawk 100 lead-in fighter trainer which according to the DoD and BAe was the only option that offered a cockpit suitable for more advanced training on the fast Gripen.

Somehow, strangely, the SAAF also got Hawk 120s and not Hawk 100s as per the acquisition and selection process..

How this quite came about, no one seems to know, except possibly, Helmoed Heitman and no one ever seems to have asked the question.


But in the meantime, this country produced just about everything it needed for the SADF.

Now in the days of the SANDF it abandons all and purchases almost exclusively from foreign companies and/or foreign-owned companies, especially where the latter have the presidents' or ministers' brother, brother-in-law or advisor as BEE partner.


Bring me another bucket.