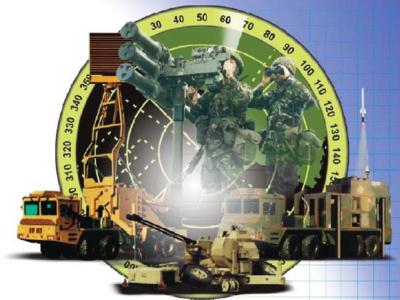 Pic: A depiction of Sable showing the Thutlhwa (Kameelperd) on the left,the Starstreak VSHORADS (centre), the GDF 005 (bottom) and a containerised vertical launch Umkhonto SHORADS on a Kynos 8x8 truck (right)

The South African Army is a step closer to gaining a short-range air defence missile system (SHORADS), with a manufacturer being awarded a small contract to conduct risk reduction study for a ground-based launcher.

The tiny contract came just before an announcement by the navy of Finland that the Denel Dynamics Umkhonto-IR Mk II SHORAD has successfully completed a series of system validation firing trials in the Baltic Sea.

The latest contract, worth R173 915, for “risk reduction studies for a ground based launcher” was awarded to Denel Dynamics on July 9. Project Protector is currently a technology programme being funded by the SA Army ADA through the Department of Defence's Defence Secretariat's Defence Materiel Division's Directorate Technology that is headed by Rear Admiral (Junior Grade) Derek Dewey.

Also part of Sable are eight Thales Starstreak Lightweight Multiple Launchers and about 100 Starstreak VSHORAD high-velocity missiles acquired under Project Guardian *1. These missiles are allocated to 104 Battery of 10 ADA Regiment in Kimberley. The battery that can be parachute dropped also includes two two Thales Page continuous-wave (CW) low-observable battery air defence local warning radars with a 20km range. Denel credits the cannon with a range of 4km and the VSHORAD missiles with a range of 5km (Thales says 7km).

To this, in time, may be added a Denel-developed SHORAD missile and a new RRS CW three-dimensional radar to upgrade the two-dimensional Thutlhwa radar. Denel Dynamics CE Jan Wessels in April told defenceWeb his engineers were moving ahead with the further development of a land-based Umkhonto SHORADS for the SA Army and other customers. This indigenous system is already in use with the SA and Finnish navies. “We are busy with risk mitigation work to advance it so that when the programme is finally switched on we are ready,” Wessels says. The land variant will a containerised launcher that an be fired from the ground or from a Kynos 8x8 truck – if the artist's concept on the Sable brochure is any indication.

Wessels added that several potential “export customers are already looking impatiently at the system.” He said the naval system “is getting a very good name” in the mlitary community, further exciting interest in the system’s landwards application.

It is not clear when Protector will migrate from technology to production project. The Estimates of National Expenditure in February noted a “64.8% increase in expenditure in the ADA Capability subprogramme in FY2010/11” that “is due to the delivery milestones of the shoulder launched air defence artillery system [Guardian] and mobile ground to air missile system programmes [Protector].” Further into the future lurks Project Outcome (GBADS III) that could see the Umkhonto enhanced to a medium range all-weather standard.

The current SA Navy infra-red (IR) guided vertical launch Umkhonto SHORAD weighs 125kg, carries a 23kg warhead and boasts a 12km range (although the Sable brochure puts SHORAD at 15 to 25km). The Umkhonto has a proven anti-missile capability *2, meaning SA joined a handful of nations to have fielded such a system with the successful firing of the Umkhonto from aboard the Valour-class frigate SAS Amatola in November 2005. Since then the SA Navy has regularly fired the weapon against various target drones *2, most recently earlier this year during Exercise Good Hope IV, a joint multinational undertaking with Germany.

“We heard it went very well,” said Wessels in April “The system has now been in service with the Navy for three years and all the feedback we get is very positive, it is really performing as advertised and more.” Wessels adds that a Mk II version of the weapon had been developed over the last three years for the Finnish navy. “Our engineering attention has been on Finland for the last three years and more. We've developed the Mk II version of Umkhonto optimised for a more challenging operational environment, that experienced in the Baltic archipelago environment. So the missile seeker has to be very advanced to lock onto target and not some background object. We are very confident that Umkhonto MkII offers unique competitive capabilities in this regard,” Wessels adds.

Six systems have been delivered to Finland and have been fitted to four Hamina class missile boats and two Hämeenmaa class minelayers. The Finnish success came against the US-German Rolling Air Frame Missile and the Swedish Bofors Bamse. The weapon is also still under consideration by Sweden for fitment aboard five of its new Visby-class stealth corvettes.

The Dynamics CE added the Mk II has now met all specifications and is in production for Finland. They will also be supplied to the SA Navy once the latter has placed an order for replacement missiles. “They're using their stocks for trials and need to replenish stocks. It will be the Mk II, we'll stop doing the Mk I, there's no point going back to it. This is will be invisible to the SA Navy client from an integration viewpoint and is an example where the SA Department of Defence (DoD) gets the benefit without having to invest directly, it is a benefit gained through export. Denel Dynamics’ investment to secure the export opportunity ultimately funded this Mk II, after the SA Navy initial investment funded the Umkhonto MkI development.”

Frigate project director Rear Admiral (JG) Johnny Kamerman at a media conference in 2006 said the development of the system had begun in 1993. South Africa decided to develop its own system even after sanctions was lifted because high-end systems such as the US Aegis were unaffordable -- "we can't afford the launchers, let alone the missiles," Kamerman explained -- and low-end systems like shoulder-launched missiles were "a waste of time".

Land-based testing ended in July 2005 when the system was adjudged shore-qualified. The testing involved telemetry intercepts of a Skua target drone in various profiles, including low-level, head on and in evasive manoeuvres *2. The tests culminated in a Skua being destroyed with a “standard warhead”, Kamerman said.

In May 2008 then-Denel Dynamics air defence missiles executive manager Machiel Oberholzer told defenceWeb the Umkhonto development path included an extended range (ER) IR variant as well as an all-weather radar-guided version and an ER version of that. "It is a good concept, six missiles in an ISO-container that can be mounted on any type of vehicle, that has a 360-degree engagement capability and a high kill probability due to is large warhead," Oberholzer says.

As stated above, the current infrared-guided Umkhonto has a range of 12km. Oberholzer said this was being expanded as part of a pre-planned product improvement initiative. An extended-range infrared version is planned and will range up to 22km. The radar version, dubbed the AWSAM – all weather surface to air missile – would have a 20km range, while an extended range version fitted with a booster rocket (AWSAM-E) – would hit out up to 30km – which placed it in the medium-range capability.

He added the advantage of such a family of missiles was that "you can have a cocktail of missiles in your launchers so you can engage with the most appropriate one to the threat. Infrared missiles are cheaper than radar and you don't want to use an expensive missile to shoot down an easy target."

Wessels says Denel Dynamics is looking for funding partners for the advanced Umkhonto future configurations . “It will ideally be a programme like A-Darter”, the R1 billion joint venture 5th generation IR short-range air-to-air missile being developed with Brazil. But he also questions the notion that Umkhonto IR is just a good-weather system. “If you can just highlight that's not the case. The fact that the SA and Finnish navies have selected Umkhonto after in-depth studies – despite typical naval weather conditions – says it all. How this missile works is you have an advanced 3D radar on the ship or launch point and that keeps tracking the target after the missile is fired and via datalink guides the missile to within the last kilometre or so.

“Only then does the IR seeker become active. The more accurate the 3D radar is, the more you can do and the better the performance as an all-weather system. The IR seeker is just used for the last pinpoint accuracy. The better the radar, the better the missile.” It is therefore no longer clear that the all-weather variant will be radar guided as was provided for in earlier thinking.

With acknowledgement to Leon Engelbrecht and defenceWeb.

*1I am unaware of any open tender to acquire the eight Thales Starstreak Lightweight Multiple Launchers and about 100 Starstreak VSHORAD high-velocity missiles acquired under Project Guardian.

Also a target drone has an optical and/or radar cross-section several orders of magnitude greater than a real anti-ship missile, making a drone far easier to acquire, track, engage and destroy. For example the Kentron Skua has a wingspan of 2,81 metres while an Exocet MM40 Block 3 has a diameter of just 348 mm. A rough calculation gives an order of magnitude difference in effective cross-sectional area in frontal approach.

I have observed several gun firings at low-speed and high-speed towed target. It is really easy, plenty of warning, known incoming direction and altitude, direct radial approach, but such targets are seldom hit.

Okay, an anti-air missile has both the advantage of the ship's 3D radar plus terminal optic and/or radar terminal homing.

But believe me, a high-speed ASM with 3D attack approach including initial low-level sea skimming followed by steep climb and zenith dive is a hard ask. Especially when there are two or even four of these bogies attacking simultaneously from different quarters.

Life will be short on a surface combatant in modern warfare.