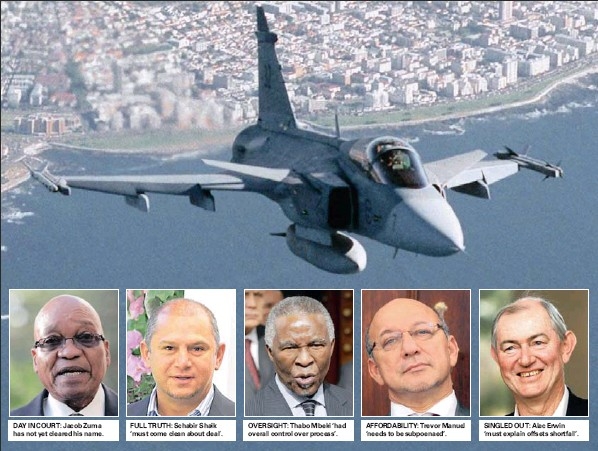 Day In Court: Jacob Zuma has not yet cleared his name.


President Jacob Zuma's Seriti Commission of Inquiry into allegations off fraud. corruption, impropriety or irregularity in the Strategic Defence Procurement Packages has been in existence for more than a year and a half. And so far it has established nothing. Now this increasingly controversial commission is set to launch into a cycle of public hearings between August and the end of November.

To date only a group of whistleblowers on the scandal and researchers who made submissions to the commission have had subpoenas served on them ahead of hearings scheduled for March this year, but subsequently postponed.

But this week commission spokesman William Baloyi intimated that a final list of subpoenas was being drawn up and would be announced at a later date.

Against the backdrop of its renewed activity, Shireen Mukadam and Ivor Powell asked some of the key players who blew the whistle on the allegations of arms deal corruption just who should be called to testify before the Commission in order to uncover the about the R60 billion plus scandal that continues to haunt the country.

Patricia de Lille – the politician who put the arms deal corruption scandal on the government’s agenda in a sitting of Parliament – says Zuma should be called on to clarify his relationship with his former “financial adviser” Schabir Shaik.

Despite frequently demanding his day in court to clear his name, Zuma has not to date had to answer to the charges – this after a subsequent prosecution initiated by the now-defunct Directorate of Special Operations was derailed when then-acting national director of public prosecutions Mokotedi Mpshe controversially withdrew charges in 2008, accepting that his predecessors in the NPA had been guilty of politically driven interference in the administration of justice.

Another opportunity to address the issue was passed up – ironically – by his establishing the Seriti Commission in the first place.

Required, under a Constitutional Court application brought by activist Terry Crawford-Browne, to furnish reasons for not appointing a judicial commission of inquiry into the arms deal, Zuma opted at the 11th hour to announce that a commission would indeed be instituted.

Pursuing the role played by Zuma, several whistle-blowers have suggested Shaik should also be called before the commission.

Mail & Guardian journalist Stefaans Brummer called for Shaik to be called to give “the full truth, once and for all, of the Thales bribe for Jacob Zuma, and of all his other interactions with JZ”.

Zuma was also identified as a potential witness by UDM leader Bantu Holomisa, who pointed to evidence uncovered by a British risk consultancy, and made public in 2008, alleging that R30 million was paid to former president Thabo Mbeki – or a recipient nominated by him – to guarantee that German shipbuilder Ferrostaal received the contract for four submarines. Of this amount, R2m was allegedly paid to Zuma. The remaining R28m allegedly went to the ANC. In addition to the issue of the alleged R30m sweetener paid by Ferrostaal, several commentators drew attention to the fact that, as deputy president to Nelson Mandela, Mbeki had a mandate to exercise ultimate oversight over the procurement process of the late 1990s.

Crawford-Browne suggested the former president should be called to explain “how, given the apartheid legacies of poverty, an ANC government could prioritise the purchase of weapons before poverty eradication?”

Crawford-Browne is seeking to have the procurement process repudiated on the basis of corruption and failures to match up to constitutional responsibilities. This is backed up by a legal opinion prepared by human rights advocate Geoff Budlender.

Defence contractor Richard Young’s questions are more detailed. He suggested two senior naval officers – Vice Admiral Robert Simpson-Anderson and Rear Admiral Jonny Kamerman – be called to reveal whether they were “called in front of president Thabo Mbeki to take instructions regarding the execution of the corvette project”.

Young also suggested the commission interrogate a series of interactions between the naval top brass and executives from German shipbuilder Blom+Voss, French contractor Detexis (which was awarded the contract originally slotted for Young’s company C2I2), Thomson-CSF (now Thales), among others.

After winning a disclosure of information case brought against the office of the auditor-general, Young is legally in possession of very substantial documentation collected by the first major investigation into the arms deal scandal, conducted in the early 2000s by the now defunct Directorate of Special Operations, the office of the auditor-general and Judge Willem Heath’s Special Investigating Unit. Young was able to demonstrate, on the basis of the documentation, substantial interference by the executive in the final report of the joint investigation.

Several respondents said former finance minister Trevor Manuel should be issued with a subpoena. Among the key questions raised – by Holomisa and researcher Paul Holden, the author of The Arms Deal in your Pocket, and co-author of the compendious Devil in the Detail – was why Manuel chose to override a specially commissioned affordability report on the then-prospective arms deal – “a scathing report”, according to Holden – which “indicated that the economic impact of the deal was to be broadly negative and the materialisation of offsets uncertain”.

Former minister of trade and industry Alec Erwin was singled out by Holden as another of the four members of the ministerial subcommittee responsible for overseeing the arms deal. As minister in charge of and a major proponent of the arms deal offset programme, he said Erwin should be called to account for the fact that measurable economic benefits realised from contractor investments into the South African economy fell some R100 billion short of the mooted R110bn.

Erwin should also be asked to explain why he “insisted on the commercial confidentiality of information surrounding offsets, despite it being of manifest public importance”.

In correspondence with the Seriti Commission, the role played by the ANC as a party in the scandal is highlighted. In this vein, Crawford-Browne raised the thorny issue of ANC funding, suggesting that former treasurer-general Mendi Msimang, as well as his successor, Zweli Mkhize, and secretary-general Gwede Mantashe, were responsible to account for where the ANC gets its money. “I would want to know how the ANC suddenly went from insolvent to worth R1.75bn at the time of the 2007 Polokwane conference” Crawford-Browne said.

The alleged funding of political entities was also highlighted by De Lille in calling for scrutiny of a transaction uncovered by Swedish investigators regarding a “donation” of tens of millions of rand paid by British Aerospace and its partner Saab to the officials from the National Union of Metalworkers of South Africa, supposedly for a training college to be built in South Africa.

In investigations by the UK’s serious fraud office, as well as German probes, several multimillion-rand “consultants” to the various bidding companies were identified as allegedly having benefited significantly from the arms deal, among them the enigmatic Tony Georgiades, former Armscor executive Llew Swann and Fana Hlongwane. Among other respondents researched, Hennie Van Vuuren suggested such figures would be in a position to assist the commission in its search for the truth.

Holden describes former military adviser Shamim “Chippy” Shaik, brother to Schabir, as having been “absolutely central to the arms deal procurement process”, and as having played a role “at all levels in the decision-making hierarchy”, and as having been instrumental in “making decisions that made a material difference in the selection of winning bidders”.

All those canvassed by Weekend Argus called for Chippy Shaik to be called to testify.

Holden was equally specific, citing former US ambassador George Traill in alleging that Shaik was directly involved in the solicitation of bribes. The spotlight was also shone on a company with personal links to the Shaik brothers, as well as family connections with former defence minister Joe Modise.

FBS, a company with no history in the field of logistics, emerged as the recipient of 70 subcontracts worth R750m, according to Holden.

With acknowledgement to Shireen Mukadam, Ivor Powell and Sunday Argus.

Why did you take the USD3 million bribe from Christophe Hoenings of Thyssen on behalf of you and you representing a group of others?

Who are the others in the group represent by you?

Why did you take the DM2,5 million bribe from Christophe Hoenings of Thyssen?

Did you receive a bribe from Christophe Hoenings of Thyssen?

Did you receive the bribe payment through former chief of the SA Nay Vice Admiral Dries Putter?


Why did you meet Christophe Hoenings of Thyssen and Herbert von Nitzsch of Blohm+Voss in Tony Georgiadis's permanent suite at the Sandton Sun Hotel in Johannesburg on 24 January 1996?

Who arranged this meeting?

Why did you invite Tony Georgadis to your home in circa October 1995?

Why did you want to meet with the company Detexis in France in June 1999?

Was this regular with you being alone?

Was this regular without the presence of both Armscor and the German Frigate Consortium?

Why did you want to have an informal meeting on 28 June in Paris with one or several representatives from the top management of the Thomson-CSF group?

Was this regular you being alone?

Was this regular without the presence of both Armscor and the German Frigate Consortium?

Did you and Rear Admiral Jonny Kamerman get called in front of President Thabo Mbeki to take instructions regarding the execution of the corvette project?

Who tried to bribe you?

Did you and Vice Admiral Robert Simpson-Anderson get called in front of President Thabo Mbeki to take instructions regarding the execution of the corvette project?

What exactly was the acquisition mechanism for the Exocet MM40 surface-to-surface missiles (SSMs)?

Was the full and normal price for all 17 SSMs actually paid or was there some kind of lease or hire purchase scheme?

Are you a member of the group represented by Chippy Shaik who solicited a bribe from Christophe Hoenings of Thyssen?

Who are the members of the group represented by Chippy Shaik who solicited a bribe from Christophe Hoenings of Thyssen?

Did you receive instructions to increase the French component of the corvette combat suite?

From whom did you receive instructions to increase the French component of the corvette combat suite?

Why precisely did you meet with Duncan Hiles and Kevin O'Neill of ADS on circa 16 December 1998 regarding the corvette combat suite architecture?

Why were you meeting with senior executives from Thomson-CSF in Paris in December 1998 and later in South Africa in 1999?

Why did you guarantee Thomson-CSF the contract for the combat suite and its sensors long before the contract negotiations had even commenced?

Why did Thomson-CSF need to bribe Jacob Zuma R500 000 per year until ADS started paying dividends in order to protect it from the investigation into Project Sitron?

If you can get proper answers to these questions you will have solved the corvette leg of the Arms Deal.

But if you don't like my questions I have two thousand others.

And if you don't like my witnesses I have two hundred others.