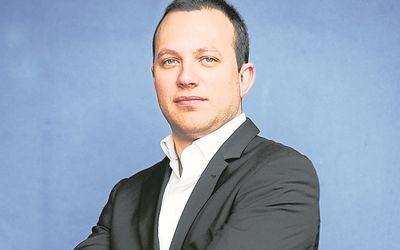 Basson’s objective was to collate nearly a decade of his journalistic investigations into this controversial character. So the book is no smoking gun.

Neither is it a Mark Gevisser, Thabo Mbeki 935-page biography. More’s the pity as I’m itching to learn more about the psychodynamics of the man from Nkandla. Yet, Zuma Exposed both shocks and dismays. It’s a distressing, engrossing grocery list of the manipulations, cunning and deceit of the head of the fish that is SA Incorporated.

For if what lies between its covers was true of the leadership of other countries, Sylvio Berlusconi of Italy excluded, he’d have lost his job.

Basson, assistant editor at City Press, is bemused that his book is attracting criticism on the one hand for not dishing more dirt on the president, while being attacked by the African National Congress (ANC) for its timing and contents. The former was never his intention, he says. The latter does not surprise him.

"Zuma is a paranoid president and he, and the ANC, find it almost impossible to respond to a piece of investigative journalism without seeing some hidden motive or conspiracy behind it. I wish we could just debate the facts."

Basson’s fact is that the election of a new ANC president at Mangaung in December marks five years since Zuma was elected. It’s a good time to reflect on his performance in office, the declining support for him since Polokwane, and his turncoat former praise singer, Julius Malema.

"I’m not a political analyst, I’m an investigative journalist, so I can’t say how or why Zuma has seemingly survived. But, I wanted to put the facts out there so nobody can say, ‘I didn’t know’," says Basson.

Many South Africans scuttled behind that refrain, post-apartheid. Draconian apartheid press laws lent a little credence to their stance, but those who wanted to know, did so. Today, so far, we have no excuse for not being cognisant of what’s going on, yet only those who read, watch and listen to a cross-section of the media are, it seems, fully conversant with the skullduggery stalking our land.

And those who are tuned in, tend to forget: "People might not remember that Schabir Shaik kept on paying Zuma after his conviction for corruption, and Zuma continued to accept the money of a convict."

The merit of the charges against Zuma, "was always clear, it was a valid, strong case: it was their timing, revealed in the so-called spy tapes" that led to acting National Prosecuting Authority boss, Mokotedi Mpshe "withdrawing them under huge pressure", says Basson.

He quotes a former Zuma ally who no longer trusts him to lead the ANC or SA: "He doesn’t understand corruption."

His uncontrolled libido is another weak point, several "ANC sources" told Basson. "I heard the same refrain time and again: ‘Everybody in the struggle knew that thing would be his downfall. It’s his Achilles’ heel. The man is out of control’, I was told."

He reels off what he describes as Zuma’s legacy, "Shabir Shaik, the spy tapes that got him off his corruption charges, Nkandla, his relationships with women, his ever expanding family, his extreme growth in wealth and his cost to the taxpayer."

Much of this Basson, and many of Zuma’s detractors, ascribe to "bad judgment. It has, unfortunately, clouded the good things he has done".

The author met Zuma’s former friends and current concerned allies only after elaborate precautions were taken to ensure they were not observed. Cars, venues and contact numbers were constantly changed.

"I had to remove my cellphone battery and place it on the table when we met. I was told that paranoia had set in at the highest levels and that all comrades now have two or three cellphones."

He himself carries three cellphones, he concedes, when pressed: "I have to have some degree of awareness and safety. I’ve received threats."

It was an interview with Basson that led to Judge Willem Heath’s downfall only 17 days into his Zuma-appointed job as head of the Special Investigations Unit (SIU).

"He started spitting venom about Mbeki, who had fired him. I was shocked as it was totally unexpected." When the interview was published, Mbeki sued for defamation.

Zuma fired Heath. He also fired one-time ally, Willie Hofmeyr from the SIU, in spite of him supporting the move to drop corruption charges against Zuma — "charges that still stand", observes Basson.

Six pages of colourful, powerful infographics explain much of Zuma’s recent life. The cost of Zuma, "an approximate five-year total" reveals a figure of nearly R754m to the state, which includes R77m for "spousal support".

The Zuma Family infographic shows six wives, four girlfriends and 21 children. Under Zuma Incorporated we see 16 business entities linked directly to him, "or indirectly through his wives, children and family" although his girlfriends’ income generation is also noted — "The president had to fast-track his wealth accumulation after Shaik went to jail. It’s his pension."

Despite having had to deal with the negativity and corruption surrounding Zuma since 2004, Basson remains optimistic about SA’s future. He first attracted attention at Stellenbosch University where he worked on the student newspaper and challenged the vice-chancellor over his insistence that Afrikaans remain the language of instruction: "He said it was a language issue, I said it was racism."

Basson, a multi-award winning investigative journalist and author of the Alan Paton short-listed, Finish & Klaar, about Jackie Selebi’s downfall, worked at Beeld and the Mail & Guardian before moving to City Press. There, he and its editor, Ferial Haffajee, were at the centre of The Spear controversy.

In retrospect he sees that "we handed it to Zuma like a gift on a silver platter: he’s a master at playing the victim, and it became a political rallying point for him rather than a matter of principle, at a time when he was losing support."

Basson adds they had no idea The Spear would turn into such a weapon for Zuma. "We were naïve to think, even 18 years into democracy, that parody and satire would be engaged with and understood."

In years to come, Zuma Exposed will be a handy reference book in a chapter of our history we could have done without.

With acknowledgement to Sue Grant-Marshall and Business Day.