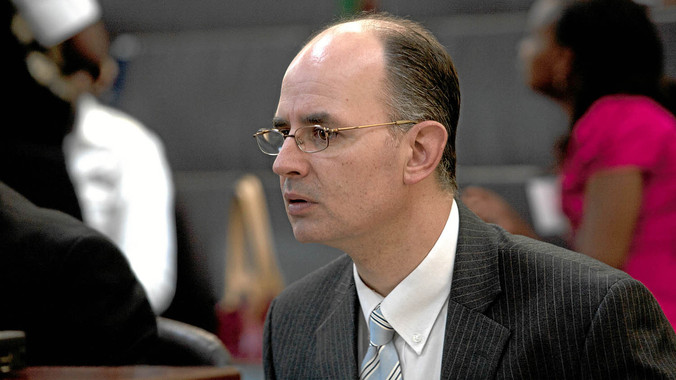 Further damning evidence of how the former director general of the justice department, Menzi Simelane, scuppered the arms deal probe has emerged.

A 2008 letter written by the former deputy director of public prosecutions, advocate Anton Steynberg, to Martin Fischer in the Düsseldorf, Germany, prosecutor's office, outlined his frustrations at Simelane's apparent stonewalling of a German request for co-operation in the investigation.

Steynberg explained that Simelane did not forward the request for mutual legal assistance to the National Prosecuting Authority (NPA).

"The reasons for this are not yet apparent, although we are attempting to seek clarity," Steynberg wrote.

"We also read in the press that the German authorities are considering terminating the investigation and accepting a plea of guilty from the suspect [the German Frigate Consortium] on certain lesser charges. There is speculation that this may be due to a perceived lack of co-operation from the South African authorities."

The German authorities were at the time investigating South Africa's acquisition of corvettes from the German Frigate Consortium, and had formally requested mutual legal assistance from South Africa.

The Scorpions had conducted an earlier preliminary investigation, and officially launched its own arms deal investigation in 2008.

Steynberg wrote that the NPA was doing all it could to facilitate co-operation between the parties. To assist special investigator Isak du Plooy and his team, he asked Fischer to send the NPA a copy of their official request or a formal letter outlining the information in its possession.

"You must be aware that this is a matter of great political sensitivity," he wrote.

"Several persons whom your request is reported to implicate are either past or present members of the Cabinet, or other persons of great political influence.

"Although the NPA is a constitutionally independent entity*1, the department of justice does not enjoy the same measure of independence. The director general is directly answerable to the minister of justice," wrote Steynberg.

"Although I do not wish to speculate on the reasons for the delay in executing your request or the failure to refer a copy to the NPA, it would appear to us that forwarding us a copy of the request would have several advantages for both our investigations."

On the strength of the information contained in the German request, the NPA would be in a position to apply immediately to court to direct a similar letter of request to the Germans, which would facilitate both investigations, said Steynberg.

As the processes were stonewalled, South Africa did not enter into a formal co-operative agreement with Germany on its arms deal investigation that allegedly implicated prominent ANC figures, including Tony Yengeni, a member of the government's defence review committee. 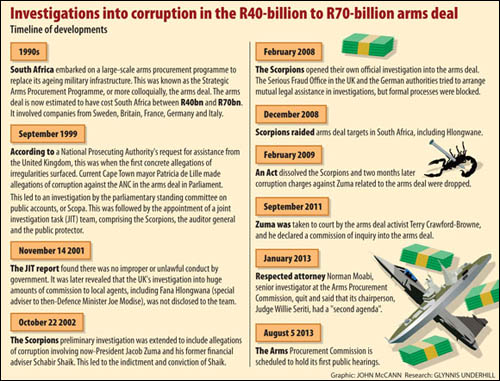 Key witness Richard Young, whose company CCII Systems lost a tender to provide integrated combat suites for the navy's new corvettes, was asked for comment on Simelane's involvement in the arms deal probe.

"No doubt Menzi Simelane will receive the Order of the Baobab for his sterling efforts," Young said.

"If formal processes had happened, there wouldn't have even been a Seriti commission of inquiry [into the arms deal]. Many of those guilty of corruption might have already been out of jail."

More than four years ago, Young received a R15-million payout after he took the minister of defence, the Armaments Corporation of South Africa (Armscor) and others to court over the loss of his controversial arms deal tender.

Simelane was removed from his post as national director of public prosecutions in October last year after the Democratic Alliance challenged his appointment by President Jacob Zuma in court. He is now working as a legal adviser to Public Services Minister Lindiwe Sisulu and could not be reached for comment.

Questions sent to Simelane and the justice department went unanswered.

However, Steynberg's plea to the German prosecutors for assistance backs up reports published by the Mail & Guardian last month, revealing correspondence sent by the acting national director of public prosecutions, Mokotedi Mpshe, to the then justice minister Brigitte Mabandla in 2007.

Mpshe complained in the letter that there was a "pressing need" for Simelane to refer the formal German request for co-operation with South Africa to the now defunct Scorpions.

"In my opinion, the failure by any South African investigating agency to investigate the reported allegations of grave criminality committed in our country, or that is justiciable in our country, is becoming ever more embarrassing," wrote Mpshe.

In an ironic twist, Mpshe later dropped corruption charges related to the arms deal against Zuma *2.

Steynberg is currently working as a senior trial lawyer at the International Criminal Court in The Hague and told the M&G he had been approached by the Arms Procurement Commission to be interviewed as a potential witness at the public hearings. "I did indicate that I was available to make a trip back, but I did not hear from them again."

Steynberg said he was still in the employ of the NPA and had been seconded to the ICC, and he would not have chosen a commission of inquiry as a way to probe the arms deal *3

He would have liked to see a probe take the form of an in-depth forensic investigation, which would provide dockets that could be taken to court.

"If the object is to prosecute people, then one needs a properly qualified and properly resourced investigative team with all the necessary powers, and the political support at all levels," said Steynberg.

*1More accurately, the NPA used to be a constitutionally independent entity.

Until Thabo, then Zoomer, stepped in to save their own sorry arses.


*2It's not ironic, it's another Order of the Baobab.


*3Sure, but other than two very low hanging fruits, all the other NPA, DSO, DPCI efforts came to diddly squat.

At least Terry and me are getting a Lion, Gorilla and Gadfly Show.

That should surely raise a guffaw or more.