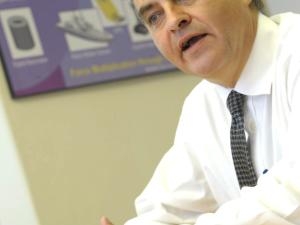 When Pravin Gordhan announced SA’s first trillion-rand Budget in February, the first thing businessman Richard Young considered was how much of the money would leak out of the economy through corruption.

“I can guarantee that between 20 and 30 percent of it will be lost to corruption,” Young says.

“The difference between corruption under the Nats and under the ANC is that the Nats and the Broeders kept it to a small group of high-level, elite people, while these days corruption is not just broad, it is deep, deep, deep. It is ubiquitous, multidimensional and all-encompassing.”

Four years have passed since the 53-year-old businessman received a (relatively) meagre R15 million payout following his marathon legal battles against the minister of defence, Armscor and others.

Young emerged as a key whistle-blower in the arms deal scandal after his company, initially selected to provide integrated combat suites to the South African navy’s corvettes, was controversially dropped.

While unsatisfactory, the settlement brought an end to years of complex litigation and enabled Young to get on with his life.

But it has remained essential for him that the huge overseas supplier companies involved in the arms deal be brought to account.

“It is far more important that the authorities… go after the bribers and not the bribees,” says Young.

“The most important thing for me is for all companies proven to have been involved in wrongdoing to be investigated and, if found guilty, to receive the appropriate sanction… For some of them, the bribing of political officials and functionaries in the defence departments in targeted countries is the key to their business model.”

Which brings us to Young’s new interest: the government’s trillion-rand electrification plans for the next 30 years.

“The bribes built into the arms deal were small cheese compared to what’s happening with the electrification programme,” he says.

“We are planning to build and pay for far more capacity than we are likely to need – but the ANC has already built itself into the deal for a cut.

“That level of corruption frightens the s*** out of me!” he exclaims.

“It is these foreign companies, whose business is based on corruption, who should be receiving the attention of the law.”

But he remains determined to see the arms deal investigations through to the end.

It was his all-out commitment to fighting corruption that saw Young take on the government in various cases to do with the arms deal.

Young describes his experience as a key witness in the public protector’s public hearings into the arms deal in 2001 as the most stressful time of his life.

It’s for this reason he’s been outspoken about the regulations that will govern the forthcoming inquiry into the arms deal.

These days, he lives on a farm somewhere in the Cape on the water’s edge, with his partner and his dogs.

In between fishing off his jetty, he runs his defence electronics company remotely and continues his arms deal endeavours.

The company turned 20 this year and is now looking at providing monitoring systems for solar and wind energy facilities overseas and in South Africa.

Young takes pains that we do not mention his home’s location because, although he does not like to describe himself as a marked man, he does concede that, having been so deeply involved in the arms deal, he was a person who was “taken note of”.

“Where I live now, I know exactly what’s going on. I feel I can live with fewer concerns about security.”

The pressures that came with taking on the arms deal might have abated, but Young’s interest in the deal – and in corruption in general in South Africa – has never ended.

“The arms deal is a boil that needs to be lanced. It has pained South African society for years and will continue to do so unless it is lanced – and, as someone who knows a good deal of what went on, it is my duty to help lance the boil so that South Africa can move on.”

“Young believes that the forthcoming inquiry into the arms deal could be the “sharp point of the lance”.

What he wants is to see the companies at the forefront of the deals answering for what they have done.

“The cheese is not yet ripe… because the end game of the arms deal has not played out and nobody yet knows what that is.”

* Segar writes for the political bureau of Independent Newspapers

With acknowledgements to Sue Segar and Daily News.

The dog's arsehole closed with a bang.

Or was it without a bang?

Or was it with a bang of silence?


But a good story despite the fateful snips.

For the sake of important truths and in case this article gets read in Zimbabwe or more crucially in Uganda..