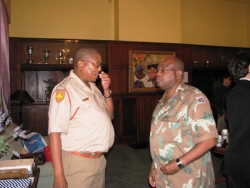 So the once mighty South African Defence Force is now also going for the dogs.

That good old liberal newspaper, The Times, reports that with dwindling budgets, an exodus of highly-skilled technical staff and reduced spending on training and equipment, the defence force can barely meet its constitutional obligations.

And they are not making this up. They are quoting military experts, some of which has have recently jumped ship to make sure they are not part of the mess.

Military analyst Helmoed Heitman says the defence is indeed collapsing. "We have huge sections of the budget spent on salaries, with equipment and training left lacking. We are hopelessly short on manpower - 20000 troops too few - and porous borders that cannot be guarded properly," Times Live quotes Heitman..

"We have pilots who can't fly [sufficient] hours, troops who have been given limits on the amount of ammunition they can use in training, and equipment, such as our frigates, which cannot be maintained because there is no proper budget.

"The defence force is collapsing. If drastic action is not taken soon, in the next three years it will be beyond recovery."

The Defence Department received over R34-billion last year from the Treasury. Its current budget of R37-billion is expected to increase to R39-billion next year.

Professor Renfrew Christie, dean of research at the University of Western Cape, says the military's budget needs a "drastic increase".

He told The Times "we spend 1% of our gross national product on defence. We need a military capable of looking after our country with the time now coming to increase spending to 2% of GDP," Christie said. "To do our duty, we need a bigger and better equipped military."

Retired admiral Chris Bennett, the former naval chief of staff, "though the navy until now has managed to stay afloat, things are beginning to bite."

You don't need to be a military expert to know things are not going as it should. Just drive past any military base in SA and see the overweight "soldiers" waggling through the gates for duty to know they would not be able to fight their way out of a paper bag.

It is beyond recovery.