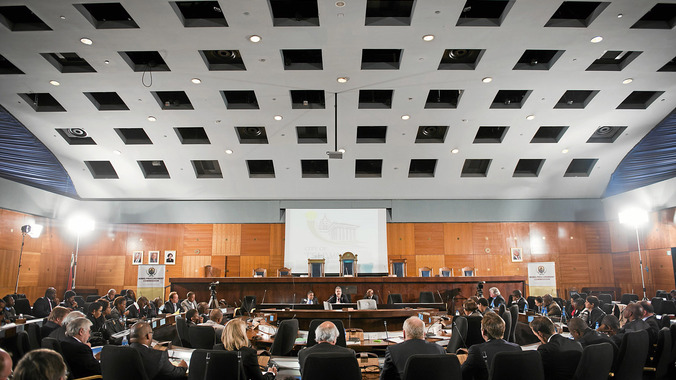 The second civilian given permission to cross-examine witnesses before the arms deal commission says testimony risks being "perjury by omission".


The second civilian given permission to cross-examine witnesses before the arms deal commission says their testimony risks being "perjury by omission" because he has been forbidden from asking them important questions.

Richard Young, a losing bidder in the arms procurement process and an outspoken critic of the deal, has applied to cross-examine a witness at the commission.

This week the commission's chair, Judge Willie Seriti, ruled that Young had to be ready to cross-examine his witness as soon as his testimony was complete.

But Young has raised concerns that the commission is not allowing allegations of fraud and corruption to be put to state witnesses as these are only meant to be dealt with in phase two of the hearings. Young wants this resolved before he arrives at the commission.

Young will be the second civilian both to cross-examine a witness and to express fears that the government's version of events is being presented without being tested. The first was Paul Holden, a critic of the arms deal and co-author of The Devil in the Detail: How the Arms Deal Changed Everything.

Speaking to the Mail & Guardian this week, Young said of the commission: "So far, most of the witnesses' testimony is almost perjury by omission. It is certainly of very little help and value.

"My bottom line is that the APC [arms procurement commission] is showing itself to be going all out to accommodate navy, Armscor and its own witnesses – who have actually added very, very little value – and is making it very difficult for cross-examiners, [whose questioning] could add enormous value to the APC's work and the public's understanding of what really happened."

The commission is divided into two phases: the first consists of evidence given mainly by government officials –including the defence department and former ministers. The second phase consists mainly of arms deal "critics", dubbed as such by evidence leaders, who regularly quote from their publicised critiques of the arms deal.

"The navy has also been very sneaky and allocated witnesses who have no involvement in or knowledge of the SDPs [strategic defence procurement]," Young said. "The APC would hardly know the difference."

Young said he was concerned about the commission's remarks during Holden's October 21 cross-examination.

Holden conducted the cross-examination after a lengthy battle to obtain key documents from the commission he needed.

He accused the commission of being one-sided, in that it made no attempt to rigorously examine the evidence of government witnesses.

At the time, the commission said it would not allow witnesses to be recalled and re-examined at a later stage. In correspondence with the commission, Young said his understanding was that phase one witnesses would be recalled for cross-examination only under "exceptional circumstances".

But phase one would not deal with allegations of fraud and corruption, making it nearly impossible to put these allegations to state witnesses.

Holden attempted to put questions to a witness from a widely-publicised report on improper payments made by Germany's Ferrostaal from April 2001, conducted by United States law firm Debevoise and Plimpton.

The report was submitted to the commission as an annexure to Holden and Andrew Feinstein's joint witness statement. Armscor ­counsel and evidence leader, advocate Simmy Lebala SC, objected on the grounds that the report raised allegations of impropriety that should not be dealt with in phase one.

In correspondence with Holden, the commission denied it was being "one-sided", saying that all the players in the arms deal were given an opportunity to air their views.

Commission spokesperson, William Baloyi said, "Dr Young applied and was granted the right to cross examine the witness, Frits Nortje. It is against this background that we will not engage with him before he exercises his right."

Baloyi said Young would be able to raise "any other matter" that he wanted to ventilate during the session.