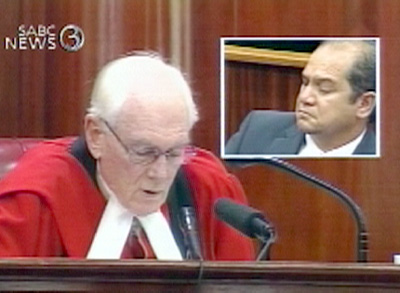 Schabir Shaik was a shareholder at ADS whic is alleged to have received an irregular tender.(SABC)


Richard Young, the owner of C squared I Squared, a Cape-based information systems company is to cross examine Fritz Nortje, the next witness in the inquiry into the multi-billion rand arms deal in Pretoria.

Young alleges there were irregularities in the awarding of the Combat Suites contract to a sister company of ADS or African Defence Systems. Schabir Shaik was a shareholder at ADS.

The Arms Deal inquiry is venturing into controversial territory. This involves Schabir, his brother Chippy and possibly then President Thabo Mbeki.

Evidence leader, Advocate Simmy Lebala, says a key witness Fritz Nortje will be cross examined. Meanwhile, it remains unclear if the term of the Commission will be extended. Its terms of reference is due to expire in November.

Presidential spokesperson Mac Maharaj says the matter was being attended to.

With acknowledgement to SABC News.