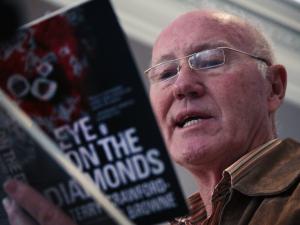 Anti-arms deal campaigner Terry Crawford-Browne says he will turn to the Constitutional Court if his submission to the commission of inquiry into the controversial multi-billion-rand arms deal is not made public.

This follows a request by the commission for a fully motivated application for the release of details, which Crawford-Browne supplied last week, after his initial request accompanying his submission in June was not entertained.

“It’s a complete contradiction of everything in the constitution and the assurances given by [Justice] Minister Jeff Radebe,” Crawford-Browne told Independent Newspapers yesterday.

“Having been the cause of the commission of inquiry I cannot completely ignore it.”

President Jacob Zuma announced the commission in September last yeat in the midst of Crawford-Browne’s Constitutional Court application for a truth and reconciliation-style inquiry into the arms deal. It was widely welcomed, even if it could open the door to Zuma having to testify given that he faced scores of arms deal-related charges in 2007 before they were withdrawn in 2009.

Commission spokesman William Baloyi confirmed eight submissions were received by the deadline at the end of July.

In September 1999, De Lille, then a PAC MP, claimed in the National Assembly that there were underhand dealings in the multi-billion-rand arms deal and,in a debate, called for a commission of inquiry.

It is understood others who made submissions to the commission chaired by Judge Willie Seriti include Andrew Feinstein, the author of two arms deal books and former ANC co-chairman of Parliament’s watchdog on public spending, Scopa, who fell foul of the party line over the arms deal. Author Paul Holden, who also wrote on the South African arms deal, is also said to have made a submission.

Not so, Richard Young, who blew the whistle on corruption after an unsuccessful bid for an arms deal contract. He told Independent Newspapers he would wait until he was subpoenaed, and thus protected from any defamation claims.

“I would be very, very exposed to defamation claims. I want to be legally impelled to do it [testify],” he said. “If a lamb has to be sacrificed, give it the dignity of leading it to the altar, don’t make it walk by itself.”

While Young says he has been assisting the commission of inquiry, and would continue to do so but he expressed reservations that it seemed no final report was required and because the commission reported to the president.

On Wednesday, after submissions closed, the presidency confirmed it had received an update from the commission.

“The commission is progressing well and must be allowed to complete its mandate unhindered by any preconceived or prescribed outcomes,” said Zuma, who expressed his full confidence and underscored the commission’s “integrity and independence”.

While eyebrows have been raised over the lack of public access to submissions, questions are also raised over the postponement of public hearings, initially scheduled for the end of the year, to the first quarter of next year, most probably February. However, Baloyi said it was a logistical matter.

According to the Financial Mail, commission chairman Judge Willie Seriti and investigators visited England and Germany in June.

It could not be confirmed whether the commission of inquiry was also in touch with the Hawks, who had wanted to send investigators abroad after the corruption claims in Sweden and Germany emerged, but could not as no mutual international assistance agreement was in place.

I'm not sure that the Hawks wanted to send investigators abroad.

They wanted to close down the investigation as fast as possible.

They were invited and boxes of documentation had been prepared and waiting for them.

But were stopped by Minister of Injustice, Jeff Radebe.