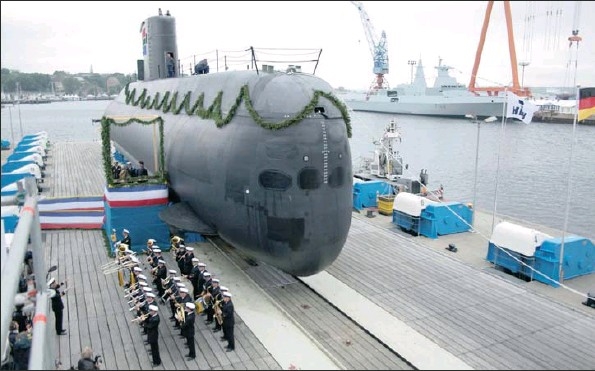 FLASHBACK: A Type 209-class submarine, part of the controversial arms procurement deal, is launched at a shipyard in Kiel, Germany

The Arms deal commission has been accused of intimidating witnesses by demanding to know how they obtained their documents.

The commission warned witnesses it would not accept unlawfully obtained evidence and that they must state whether their information was classified.

The commission – which was set up by President Jacob Zuma to probe the controversial multibillion-rand arms procurement deal – is still reluctant to subpoena the ANC or its officials.

The commission has reportedly written to witnesses warning them that they would be asked to verify the authenticity of documents submitted to it and to state whether documents were classified and if so how these were obtained.

One of the witnesses, Richard Young, confirmed receiving a letter to this effect from the commission’s head of research, Fanyana Mdumbe.
He said Mdumbe sent him an e-mail a week ago asking him to submit a sworn affidavit. Young described the commission’s action as “witness intimidation”.

Young had been subpoenaed to appear before the commission but the subpoena expired after its public hearings were postponed.

Arms deal whistleblower and Cape Town mayor Patricia De Lille said even though she has not received such a letter, the request from the commission was tainting its independence. It was equivalent to going after the messenger instead of the message.

David Cote from Lawyers for Human Rights, representing witnesses Hennie van Vuuren, Andrew Feinstein and Paul Holden, confirmed that they had been in contact with the commission to discuss the matter.

Lawyers for Human Rights had responded to the commission, saying that they expected the commission would respect witnesses’ rights to keep their sources confidential.

The group received the latest correspondence from the commission on Friday, saying that the matter would be dealt with at the hearing itself, which is due to start on August 5. “We urge the commission not to let the issue become a red herring that deflects the focus of its work,” said Cote yesterday.

Former IFP MP, Professor Gavin Woods, said he had not received the letter but that the threat was worrisome.

“I’m puzzled that they are doing that. Surely their mandate is to find the truth. It makes you wonder if there is truth in the allegations made about the appointment of the chairman,” he said.

“Some documents would be from the military and have various degrees of confidentiality. Others are cabinet minutes.”

Mdumbe did not reply to calls and text messages, and commission spokesman William Baloyi said he could not respond to queries within a day.

At the same time, calls are mounting for the commission to subpoena ANC secretary-general Gwede Mantashe and treasurer-general Zweli Mkhize to appear.

In a letter from the lawyers of arms activist Terry Crawford-Browne to the commission earlier this year, Crawford-Browne reiterated the need to subpoena the ANC for documents and financial records.

“The ANC paper trail is a primary source of concrete evidence on this aspect… It is the duty of the (commission) to have long since obtained the ANC financial and other documentary records. The refusal to do so is illegal in that it is irrational to so refuse,” said the letter from lawyers Abrahams Kiewitz Incorporated.

In the letter, Crawford-Browne said it was unfair for the witnesses to give evidence without having sight of the ANC documents that had been procured by the commission.

“These documents are at the heart of the rationale for the arms procurement deals and will… reveal the corruption involved,” it states.

Crawford-Browne had threatened the commission with a high court application to force it to subpoena the ANC.

By Thursday, the commission had still refused to subpoena the ANC.

With acknowledgement to Sunday Argus.