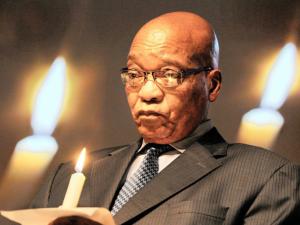 Cape Town - Acting national prosecutions boss Nomgcobo Jiba has said she can’t be held accountable for the failure to comply with a Supreme Court of Appeal order relating to the handover of the so-called Zuma spy tapes.

In court papers filed this week, Jiba said a full transcript of the secret recordings had been in the possession of President Jacob Zuma’s lawyer, Michael Hulley, since April 25.

Her affidavit says Hulley believes the transcript should remain under wraps.

Jiba suggests it be left to the court to decide whether they should be produced.

Attorney Mervyn Smith, acting for the DA, said on Thursday that it was “a scandal” that the National Prosecuting Authority was allowing itself to be “led by the nose”. The NPA had done nothing for months to comply with the appeal court’s order, he said.

The intercepted conversations were the basis for the decision to drop charges of racketeering, corruption, fraud and money-laundering against Zuma shortly before the 2009 elections.

Then-acting prosecutions chief Mokotedi Mpshe quoted from them extensively when he announced the decision.

A full transcript of the tapes has not been made public.

The Supreme Court of Appeal ruled on March 12 that Mpshe’s decision was reviewable – and ordered the NPA to produce a record of the “documents and materials” relevant to the review, including any that informed Mpshe’s decision.

The court order allowed for representations made on Zuma’s behalf – and responses to them – to be excluded if disclosing them would breach confidentiality.

It gave the NPA 14 days to hand over the “reduced record”.

Last month, the DA launched an application in the Pretoria High Court for an order compelling the NPA to comply and for Jiba to show why she was not in contempt. Zuma is a respondent in the action.

“It is inconceivable there are no internal NPA memoranda, reports or minutes of meetings dealing with the contents of the recordings and/or the transcript itself,” the DA’s attorneys told the NPA in June.

Jiba in her affidavit says such documents do exist, but “are inextricably linked with the recordings or transcripts”. All dealt with representations on behalf of Zuma “on the basis of confidentiality”.

With acknowledgement to Gaye Davis and INLSA.

There is such a thing as severability under PAIA.

But it is inconceivable there are no internal NPA memoranda, reports or minutes of meetings that are not inextricably linked with confidentiality provisions of the court order.

The recordings or transcripts themselves are not confidentiality provisions of the court order.

But this is actually a whole bunch of horse shit.

Zuma's point girlie Jiba says she doesn't have the transcripts nor the recording tapes and that Zuma's attorney and current official legal advisor has these.

Either this is untrue, or the NPA never ever had them.

But they did have something, because they used the cherry-pickings of them in the press conference that fateful day in early April 2009.

It is trite logic that if the NPA had the tapes, they would have the transcripts, so in this instance they would be lying under oath to the court and the applicant.

If it never had the tapes nor transcripts it would be relying on the accused's attorney's version of the contents of the tapes, in this instance the NPA's case would disintegrate because clearly in law one cannot reply on the version of a party which gains by it.

Is this not the Plascon-Evans principle?

second and important leg of the Plascon-Evans rule namely whether the disputes raised were real, genuine or bona fide, or whether the allegations or denials were so far-fetched or clearly untenable that the court would have been justified in rejecting them merely on the papers.

Yes, me thinks it is.

What's more, the NPA should have arrested Hulley for being in possession of these tapes because such possession is unlawful, indeed criminal.

An interesting angle is whether there was a lawful interception order for this fateful cellphone intercept between Stooges Ngcuka and McCarthy (and some others)?

If so then Judge Willie Sereti would have signed the intercept order as Judge of Interceptions of the time.

But he says he has forgotten.

Like Thabo Mbeki says he's forgotten whether he had a fateful meeting with Thomson-CSF in Paris on the 18th December 1998.

But I think the whole thing was a setup and McCarthy got rewarded with a luscious stint at the World Bank in New York as Chief of Compliance.

Also sounds just like a deal set up by the master of these things, Moe Shaik - who received a mandate from the ANC's Save Zuma Committee just a couple of weeks prior to "do anything it takes".

So that ended the Thales/Thetard/Zuma leg of the Arms Deal.

But what of Project BAE and the German leg of the Arms Deal investigation continuing to receive attention?

Yes, surely, but just until General (FNGR) Meiring and General (FNGR) Dramat got hold of the matter and ensured their chacma careers and pensions in SAPS.

Now we have last stop Sereti-vlei on the Arms Deal train to nowhere.

From whence does Zuma's official legal advisor derive his emoluments?