Saab has formally handed over its last four of 26 Gripen C/D fighters*1 ordered by South Africa.

The aircraft were delivered in Sweden earlier this year so that South African Air Force pilots could participate in a multinational Gripen exercise staged in the Nordic country and called "Lion Effort", says Magnus Lewis-Olsson, president of Saab South Africa.

The Gripens delivered to South Africa are "probably the most modern" versions of the aircraft, Lewis-Olsson says. 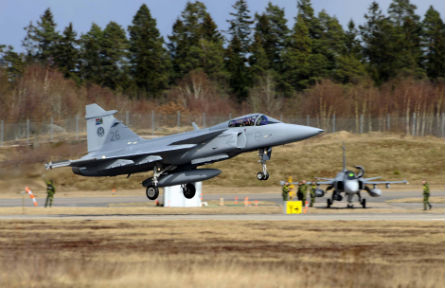 The integration of the South African/Brazilian-developed A-Darter air-to-air missile is complete, along with the Thales digital joint reconnaissance pod. The SAAF's aircraft have also received a helmet-mounted display, which is a first for the Gripen, Lewis-Olsson says.

But even though development is complete, the aircraft will be continually modernised. The next update is the Weapon System 20 standard, which will be added soon. 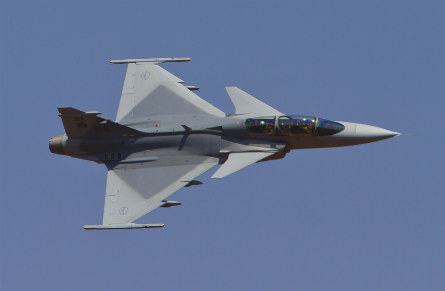 Lewis-Olsson says that South Africa should consider adding parts of Saab's next-generation Gripen E/F modernisation to its fleet, or even consider participation in the programme, which has already received the support of the Swedish and Swiss governments.

Lewis-Olsson says that the Gripen's prospects look promising; he projects sales of up to 300 aircraft in the coming years.

With acknowledgement to Dave Majumdar and Flight.

You want some proof?


We, The People, have been diddled (again), this time out of two (2) JAS39 Gripen single seater fourth generation jet fighters.

Who pocketed the difference?

Has the South African Government ever told its People that it reduced the purchase order from 28 to 26?

Are we The People now paying less than the original R10 billion contract price?

Or are we The People still paying the original R10 billion contract price and getting two units less?


Note the LIFT and ALFA contact price was R15,916 billion. There was no separate price for each, so intertwined was this bumiputerian skullduggery.

But for argument's sake, the split was about 2/3 for the Gripen ALFA and 1/3 for the Hawk LIFT.

"According to the contract, the nine dual-seater Gripen aircraft will be delivered from July 2007 and the nineteen single-seaters from August 2009. However, the air force has 50 supersonic Cheetah fighter aircraft able to operate until 2012, which will be replaced by the Gripen from August 2009."

Those are Cheetah C third generation jet fighters. There were actually 38 complete aircraft taken into service by the SAAF in 1997.

That's effectively two squadrons' worth, plus some spare aircraft for the purposes of combat and accident attrition (yes, that actually happens to combat aircraft).

Indeed it even actually happens to military non-combat aircraft.

There have been the following SAAF accidents in recent and very recent times (this decade):


Back to the Cheetah C.

One of the 38 Cheetah C crashed in earlier times.

But there were many spare engines and spare airframes.

Enough all round to fight a small regional war.

Also the Cheetah C were actually probably good as is until at least 2015 and with a minor pre-planned upgrade to 2020 and a slightly more substantial upgrade to 2025.

Right now our proud Cheetah Cs are flying for the Ecuadorian Air Force.

So pleased is the Ecuadorian Air Force with its absolute bargain that it is scouring the world for more.

The Cheetah C is a hybrid of a little French, Israeli and South African cunning.

In reality, the R2 billion plus plus wasted value of the Cheetah C needs to be added to the true cost of the Arms Deal.

Right now our Cheetah Ds are also flying for the Ecuadorian Air Force.