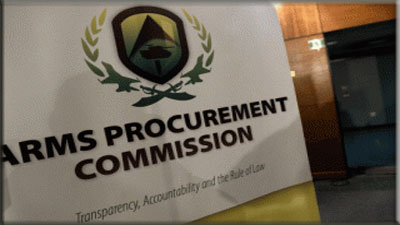 A new witness is expected testify on Monday(SABC)

The inquiry into the multi-billion rand arms deal resumes on Monday after it adjourned last Wednesday due to legal technicalities over the recalling of witnesses.

Dr Richard Young, the owner of a Cape Town information systems company, a losing bidder is taking the Commission to task over the cross examination of witnesses. This follows a ruling that witnesses can’t be recalled.

ADS the sister company of Nkobi Holdings, was awarded a R40 million contract. "If at all Dr Young wants to cross examine Mr Nortje the usual procedure will have to apply. It must be in a manner that it follows normal procedure," says Commission Chair, Justice Willie Seriti.

But, Young doesn't agree, he's also challenging government over the contract in court. "I’m pretty disappointed because all the work of the commission so far has dealt with point one and point two of the terms of reference and very little has been dealt relating to impropriety, fraud and corruption," says Whistle blower, Dr Young.

With acknowledgement to SABC News.

Just to remind some of those sports lovers out there that a whistleblower is not the same as an impimpi.