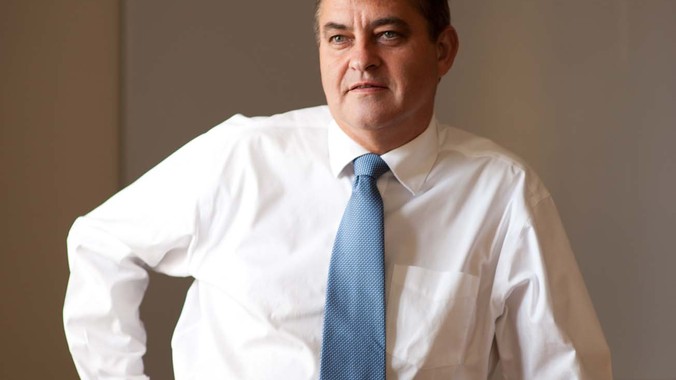 Dr Richard Young, a losing bidder to be a supplier in the arms deal, has criticised the commission over its handling of government witnesses.

The arms deal commission has come under fire again from a noted critic for its handling of government witnesses.

Dr Richard Young, a losing bidder to be a supplier in the arms procurement process and outspoken critic of the arms deal, has applied to cross-examine witnesses at the commission.

Young has locked horns with commission chairperson Judge Willie Seriti on when he will be allowed to conduct the examination and in which manner it will be done.

This makes Young the second civilian to cross-examine a witness citing fears that government's version of events is being presented without being tested. The other civilian was arms deal critic and the co-author of The Devil in the Detail: How the Arms Deal Changed Everything, Paul Holden

Young's company, C(2)I(2) tendered for a sub-contract on the corvette part of the arms deal.

His company was listed as a "candidate supplier" by the government – seen as an indication that his company was the preferred supplier.

But African Defence Systems, a company in which Schabir Shaik held shares through his company Nkobi Holdings, was the eventual winner of the sub-contract.

Young was a witness in Shaik's fraud and corruption trial.

Speaking to the Mail & Guardian this week, Young said of the commission: "So far most of the witnesses' testimony is almost perjury by omission. It is certainly of very little help and value."

"My bottom line is that the APC [arms procurement commission] is showing itself to be going all out to accommodate itself and its navy and Armscor witnesses, who have actually added very, very little value, and making it very difficult for cross-examiners [who are also its phase two witnesses] whose cross-examination could [in my case will] add enormous value to the APC's work and the public's understanding of what really happened.

The commission is divided into two "phases": phase one consists of evidence mainly given by government officials, including the defence department and former ministers. Phase two consists mainly of arms deal "critics" – dubbed as such by evidence leaders who regularly quote from their publicised critiques of the arms deal.

"The navy has also been very sneaky and allocated witnesses who have no involvement in, or knowledge of the SDPs [strategic defense procurement]. The APC would hardly know the difference," Young said.

Lengthy battle
Young said he was concerned about the events of October 21 when Holden cross-examined an Armscor witness.

Holden did the examination after a lengthy battle to obtain key documents from the commission, necessary for questioning. He accused the commission of being one-sided in that it made no attempt to rigorously examine the evidence of government witnesses.

At the time the commission said it would not allow witnesses to be recalled and re-examined at a later stage.

In correspondence with the commission, Young said: "Firstly, the APC stated that its witnesses should complete their evidence… and then be released from the APC. My understanding of this is that this would mean witnesses would not ordinarily be subject to recall only the APC, except only in exceptional circumstances."

Anyone wanting to cross-examine after a witness was released would have to make a "substantial application". Later, evidence leader Advocate Simmy Lebala SC, said the current leg of the inquiry only allowed for witnesses to be cross-examined on the rationale and utilisation of the deal, and not the allegations of wrongdoing.

"With respect, but being frank, this is an extraordinary state of affairs," Young said.

Rationale and utilisation
He questioned why phase one witnesses were not giving evidence about allegations of corruption and fraud.

In his application for cross-examination, Young said he was concerned that the commission only planned to deal with allegations of impropriety, fraud and corruption in phase two of the hearings.

The commission's terms of reference says it must investigate the rationale and utilisation of the arms purchases as well as allegations of impropriety, fraud and corruption in the deal.

"…If these Armscor [and] South African Navy witnesses and other phase one witnesses are not giving evidence in respect of 'impropriety, fraud and corruption', what is the real substantive value of the APC's work in terms of its mandate, especially in what the scope of the APC's mandate it…" Young said.

"In my view, 'rationale' and 'utilisation' are actually secondary issues."

'Totally inadequate'
Interested parties wishing to quiz arms deal witnesses on their evidence have to apply to the commission in writing for copies of the relevant witnesses' statements and evidence bundles, and promise to only use these for the purposes of cross-examination.

Young applied to cross-examine Frits Nortje, Armscor's programme manager for Project Sitron – one of the legs of the arms deal.

"The witness statement is 18 pages in length and hardly traverses anything of import that is not already in the public domain.

"The evidence documents consist of some 11 documents, indeed mainly small parts of documents, plus the witness's CV, only the latter of which I do not have in my own repository of documents and is hardly anything on which to base a cross-examination of something that had a financial value of R6 873-billion and took nearly two decades to unfold," Young told the commission.

Impropriety and corruption
On Wednesday, Seriti ruled that Young would have to cross-examine Nortje immediately after his testimony has been given – which effectively means the cross-examination must happen on Monday.

But Young is refusing on the grounds that he believes the commission will not let him cross-examine the witness on the impropriety and corruption allegations – issues that the commission has ruled must be left for phase two of the commission.

In correspondence seen by the M&G, the commission has been aware since early October that Young is presently in court in a separate matter which has been pending for five years. The matter is set down for this week. However, Young stressed this was not the sole reason for his refusal; he said it was imperative that he be allowed to raise allegations of impropriety in phase one.

And that, sports lovers, is how the game is unfolding.

Also, more for techies and aficionados :

At the final RFO stage, his company was listed as the "candidate supplier" (importantly the only one for the IMS) by the government  – seen as an indication that his company was the preferred supplier.

Previously at the RFI stage, his company was listed as the nominated contractor by the government (represented by the DoD and Armscor) – seen as an indication that his company was the preferred supplier.

Only the IMS was conformant to the SA Navy Combat Suite User Requirement Specification (URS), a crucial tender baseline document.

The actual contact to supply the combat suite databus was awarded to Detexis of France, a wholly-owned subsidiary of Thomson-CSF and sister company African Defence Systems.

Indeed it is so bizarre that its first specification only was drafted in late June 1999 after a workgroup held with SA Navy and Armscor engineers earlier that month.

More bizarre is that the Detexis Diacerto Databus is not the combat suite databus at all; it is the combat management system databus.

The combat management system (CMS) was meant to be just a another system of the combat suite.

The Thomson-CSF/ADS CMS databus link all the other systems of the combat suite via multiple RS-422 low-speed serial I/O links - in direct contradiction of not only the URS, but a multitude of SA Navy/Armscor written directives issued in the negotiation phase.

Indeed the selection of the CMS databus based on the Detexis Diacerto Databus not only contravenes the URS, but fundamentally changes the entire combat suite architecture - indeed the entire rationale for how and why the IMS was designed and developed over a period of a decade and a cost of some R32 million (1999 Rands) - 2/3rds by Armscor and 1/3rd by CCII Systems (Pty) Ltd.

Now sports lovers, one may ask why did this happen?

If was engineered by Thomson-CSF over a period of several years to give it exclusivity of the architecture of the combat suite and supply of the CMS, search radar, sonar, anti-ship missile (Thomson-CSF owns shares in Aerospatiale), and internal communication system.

It took out Altech Defence System's own indigenously developed CMS at a cost of R150 million and replaced it with Thomson-CSF's French Tavitac NT CMS at a cost of R353 million. Thomson-CSF also extracted a further R450 million in project management costs, a third of which can be attributed to the CMS. It also added on over 10% handling fees and margin to all other combat suite systems from other suppliers.

And African Defence System did all of this without any competition albeit that Thomson-CSF had purchased 50% of its equity plus one share to get full management control in May 1998 and the balance of these shares in March 1999. So other than giving Schabir Shaik's Nkobi Holdings 20% of ADS and another 20% to Lamert Moloi's FBS, Thomson-CSF owned ADS. It was a foreign company.

Who was top cover to Thomson-CSF all this time?

How and why was this allowed to happen?

The figures indicate that about R300 million on the combat suite figure got paid in bribes by the French.

The figures indicate that about R600 million on the corvette figure got paid in bribes by the Germans ands the French.

That is bribery and corruption.

And have the SA Navy or Armscor witnesses thus far mentioned one squeak of any of this and the thousand other similar questions at the APC?

That is why it is like perjury by omission.

I swear to tell the truth, the whole truth and nothing but the truth,

But now for the bargain of all time, for just three times the 1999 price of the IMS, we get the Seriti Arms Procurement Commission.