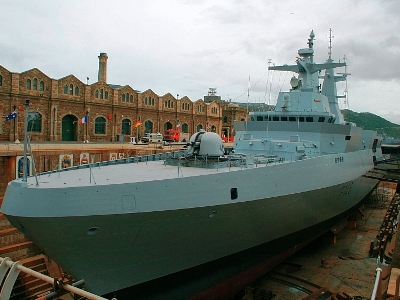 Six of these vessels were delivered to Malaysia between 2004 and 2010. Although TKMS has also offered inshore patrol vessels, the company’s main focus is on the Navy’s OPV requirement. “The Navy will always have to operate offshore patrol vessels,” said Stephan Gehlhoff, Senior Vice President, Sales at TKMS.

A request for information for Biro-category vessels was issued last year and the navy expects to issue a request for quotations before the end of this year. The Navy also has the proposed Project Millennium landing dock ship requirement and Project Hotel requirement for a new hydrographic survey vessel. TKMS helped design a helicopter landing helicopter dock (LHD) ship for Project Millennium, but this has essentially been shelved.

A number of shipyards are aiming for Project Biro. DCNS last month brought its Gowind class OPV L’Adroit to Cape Town to demonstrate the type, which would be built by Nautic Africa in Cape Town (local construction is one requirement for this project). Some of the other shipyards competing for Biro include Damen, Lurssen/South African Shipyards, Fincantieri, Austal, Abeking & Rasmussen/Veecraft Marine, Navantia, and Istanbul Shipyard.

As part of the Strategic Defence Procurement Package (SDP – aka ‘arms deal’), German manufacturer HDW supplied three Type 209 Mod1400M submarines to the South African Navy, two of which are operational. The third, the SAS Manthatisi, is held in reserve after her battery was damaged when someone incorrectly connected a power cable. The replacement battery for the SAS Manthatisi has been delivered and this vessel is now serving as the ‘first in class’ to be scheduled for a planned refit. TKMS received the contract to overhaul this submarine and expects to have the submarine back in the water next year. The overhaul process takes around 1.5 years.

Gehlhoff emphasised the importance of proper maintenance and said that for a fleet of three vessels, it should be assumed that two will be operational at any given time, with one undergoing maintenance. He noted that out of the total cost of owning a submarine, around 30% is the initial acquisition cost while 70% of the cost goes to running the vessel. It is therefore important to have enough funding, and a properly trained crew - that way incidents like the one that affected the SAS Queen Modjadji when it accidentally hit bottom during a training exercise on July 17 are less likely to happen.

Gehlhoff said that in the South African Navy, most of the trained personnel have left for the commercial industry, which pays better, or have retired. The skills shortage is compounded by a lack of training, he said, and noted that TKMS has offered to assist the South African Navy with skills training.

Apart from South Africa, other African countries TKMS has sold vessels to include Nigeria, Algeria and Egypt. Although the demand is there for new vessels, funding remains a big obstacle, Gehlhoff said. TKMS is looking at the West and East coasts of Africa for new business, as there are major piracy problems there. While piracy off Somalia has dropped significantly this year, it has increased off the West Africa, particularly around Nigeria. Gehlhoff said that TKMS has approached countries in the region and has proposed a common vessel for the southern African area. “If South Africa buys offshore patrol vessels, hopefully other countries will buy too.”

TKMS recently sold two Meko A200 frigates to the Algerian Navy *1, which are based on the four Meko A200s supplied to the South African Navy. Algeria’s ministry of defence ordered the vessels on March 26 after a year of negotiations. Gehlhoff said that the Algerian contract went into effect in August and will be followed by six months of design work, for delivery of ships in three to four years’ time, which is a relatively short period.

With acknowledgement to Guy Martin and defenceWeb.

Jonny Kamerman's, TKMS Vice President for International Sales, first big break since Joe Modise and Thabo Mbeki created a post of Rear Admiral (FNGR) *2 for him in the SA Navy.

*2For No Good Reason