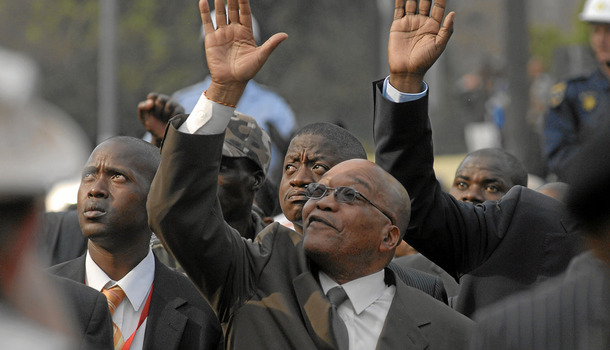 'Zuma will say we are conspiring against him," says Leonard ­McCarthy to Bulelani Ngcuka in the edited transcript of the "spy tapes" that got the corruption charges against Jacob Zuma dropped. Someone must have had a grim little laugh at those words when they were revealed in 2009, for that is precisely what Zuma, his lawyers and his allies claimed — a conspiracy against him.

Since then, conspiracy theory has been very popular in South Africa. It was not so popular when Thabo Mbeki was president and saw dark plots all over, whether cooked up by the ultra-left, a third force, Cyril Ramaphosa or big pharma. Generally, Mbeki was left alone to pursue his paranoid fantasies by himself, but in the Zuma era conspiracies are all the rage: both former police commissioner Jackie Selebi and former crime intelligence chief ­Richard Mdluli cried conspiracy when charged with crimes. The Special Browse Mole Report and the hoax spy emails posited various conspiracies, adding to the atmosphere of plot and counterplot.

McCarthy and Ngcuka were, at the time of their recorded conversation in December 2007, the head of the Scorpions and the national director of public prosecutions respectively. That very month, Zuma would replace Thabo Mbeki as ANC president. A month after the (selectively edited) tapes of McCarthy, Ngcuka, Mbeki and the then justice minister's little chats were (selectively) revealed, Zuma became president of South Africa. Of course, there had already been proclamations that the charges against Zuma were "politically motivated" and thus a "political solution" would have to be found. Spymaster Moe Shaik made the argument, in this paper and in 1 500 words, in 2008. In a phrase that sounds like something from a Victorian novelette, he said that the prosecution of Zuma was "soiled with [a] secret shame". The term "political solution" has caught on: Didn't Julius Malema call for one when he was disciplined by the ANC? Translation: a "get-out-of-jail-free card".

This is the story Adriaan Basson tells in Zuma Exposed. Basson worked for this paper a while ago and now works for City Press. He has been covering this and related stories for years, recently producing a lauded book on the fall of Selebi. As with that book, Zuma Exposed is what you might call a cut-and-paste job, taking in all those stories for the Mail & Guardian and City Press, but it is a very good cut-and-paste job.

First, it is good to have all this information in one place and lined up sequentially; readers of newspapers get it in bits — an article here and another there — and it can be hard to keep it all straight in one's mind. As with Paul Holden and Martin Plaut's Who Rules South Africa?, the reader may feel that the bulk of the content is old news, but reading it in the form of a shaped narrative adds considerably to an understanding of the many different connections that are, in themselves, a vital part of this story or tangle of stories. There is also more detail.

Second, Basson weaves it all together with personal commentary that enhances Zuma Exposed a great deal. It is not just a matter of his having been present at the "funereal" occasion at which the Zuma charges were withdrawn, say, but also that that he brings to his narrative the considered insights of an investigative journalist who has been following this saga since it began. He explains matters well — mostly; I'm still unclear on the link between the "spy tapes", Mdluli and Nomcobo Jiba, now deputy director of the National Prosecuting Authority — and makes telling connections across long periods of time.

In a prologue that profiles a nervy "comrade" now caught between the warring factions in the ruling party, Basson says many people have opined that the source of Zuma's heft within the ANC and his apparent ability to manipulate the party strategically is that "he knows where the bodies are buried" — metaphorically, of course.

This goes back to Zuma's time as head of the ANC's intelligence arm, Mbokodo, in the mid-1980s and early 1990s. He did not lead it for long (and, like apartheid's spies, played a role in getting negotiations going), but he certainly inherited an organisational structure with considerable secret powers: Mbokodo could arrest, detain, torture and execute anyone it thought was spying for the apartheid regime or otherwise endangering internal ANC security. The South African Communist Party's deep influence on the ANC, ideologically and organisationally, also meant that, in the years of struggle, exile and "the enemy within", a culture of secrecy was embedded in the ANC — and coloured by that special Soviet-Stalinist paranoia.

Yet I don't think it is a matter of "where the bodies are buried". Maybe there are some arms deal skeletons yet to rattle forth, but the culture that led to such depredations has long been in place. The significance of Zuma's role in ANC intelligence in the exile years is not what he knows about whom — Mbokodo's anti-spy activities were ramshackle. Its job was mostly internal policing and, indeed, to do with the jostling of factions or personal power plays (as when it and elements in Umkhonto we Sizwe smeared Mbeki himself as "a CIA agent").

The significance is that, as president, Zuma carries on as though he is still the head of a secret, all-powerful body, one that is pretty much above the law, whether that law pertains to criminal matters or constitutional values. When its acts prove to be not so secret or it cannot get its way, this body either tries to use the law to make its activities secret once more or it undermines the law if the law obstructs it.

All this, moreover, takes place in an atmosphere of overriding paranoia in which any criticism is an ideological death sentence and everyone is plotting against everyone else and using the dirtiest methods to do it. The political context makes it all worse: the ANC, which has not successfully made the transition from liberation movement to democratic political party, is nonetheless likely to rule South Africa for the foreseeable future and, because of proportional representation and party lists, all its power conflicts have been internalised. No wonder Zuma sang "Bring me my machine gun".