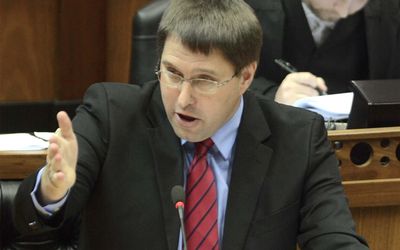 
DEMOCRATIC Alliance MP David Maynier on Tuesday defended his decision to send police a privileged and confidential draft report asking them to investigate questionable payments relating to the arms deal.

In 2010, Mr Maynier presented to Hawks head Anwa Dramat the draft report prepared by US law firm Debevoise & Plimpton for Ferrostaal, a German company that was part of the consortium to supply submarines to the South African navy.

The report claimed there were improper payments made by Ferrostaal to arms deal consultants. Mr Dramat refused to use the report, saying it was clearly marked "Privileged & Confidential" and contained attorney-client communications.

There have been allegations that Mr Hlongwane was paid millions for playing a facilitating role in the arms deal.

Mr Cilliers asked Mr Maynier whether the draft report would be of assistance to the commission, adding that Mr Maynier knew the report was unusable because it was improperly obtained. Mr Maynier replied he had a public duty to hand over the report. "The judgment call I made was that the allegations seemed serious and I took a decision to hand the report over."

Mr Cilliers also accused Mr Maynier of wasting the commission’s time because he could not vouch for the reliability of documents he provided to the commission.

On Monday, Mr Cilliers objected to Mr Maynier testifying about documents the parliamentarian had handed over to the commission.

The documents referred to an investigation by Swedish defence firm Saab, which found that R24m had been paid to a South African consultant without Saab’s knowledge. Saab, together with BAE Systems, was awarded a contract to supply the Hawk and Gripen aircraft.

Mr Maynier said he believed the consultant was Mr Hlongwane. Mr Cilliers on Tuesday said Mr Maynier could not make any factual contribution to the commission.

The commission will continue on a date still to be decided.

And that's how they have planned to dispose of the whistle-blowing witnesses.

A stratagem as obvious as the tank on the front lawn.